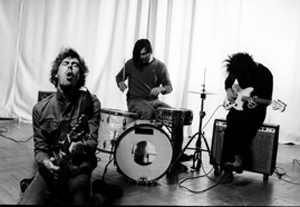 Julian Gross is a Liar. By age 20 he had barely picked up a pair of drumsticks. The most rhythmic training he had in his teens came from time spent beatboxing with his friends. Yet at 33, Gross finds himself behind the drums for the art-punk-pop-etc. band Liars.

Gross originally intended to be a visual artist. While studying at CalArts he met Angus Andrew and Aaron Hemphill. Andrew and Hemphill later moved to New York where they started an early incarnation of Liars. Their first album, They Threw Us All in a Trench and Stuck a Monument on Top, met with strong praise, and they were hailed by Rolling Stone and Spin as vanguards in the post-punk revival.

After graduating from college, Gross followed his buddies to New York, became their art designer working on T-shirts and posters and traveled with them handling the merchandise sales. Joining the band musically was a natural, if not challenging, development. His lack of experience as a drummer was balanced by his enthusiasm and perspicacity.

“It’s like when you apply for a job and they ask, ‘can you do this,’ and you say, ‘oh, of course I can,’ and then you run home and read tons of books on how to do it,” Gross explains of the learning curve.

A new chapter of Liars began when they moved to Berlin and started a series of tours around Europe. The touring established a fan base for their unique sound.

According to Gross, these tours are at once the best and worst part of being in a rock band.

“Traveling the world and playing music is amazing, but it’s a lot harder than it looks,” Gross offers. “The touring is fucking rough. It’s hard on the body, it’s hard on the brain. Driving six hours a day, then you have to play and then run back to the hotel to get some sleep for the next day … it feels like some kind of war or boot camp. It becomes surreal and abstract. And how about not making a lot of money? That fucking sucks. We never make money on tour.”

The band is happy to be home in Los Angeles at the moment, a much needed break from the tour circuit, but their movement forward has not ceased.

“We’re workaholics,” Gross admits. “When we come home from tour whether there’s a five day or a five month break we’re making music. That’s what we like to do.”

In terms of genre, Liars is not easily categorized. Not only do they combine musical styles, but art forms as well. Visual arts, for example, has always been an important component of their output. Their 2006 Drum’s Not Dead album came packaged with a DVD of 36 short films corresponding to each song.

“We asked ourselves why do people buy CDs these days. We figured we need to give you more. It was fun and easy to do.”

The sense of experimentation and fun has become the band’s trademark.

“We try to promote the idea that you can do it also. If you ever look at our live videos, we fuck up a lot … whatever! Everybody fucks up. It’s not that big a deal.”

The dramatic stylistic shifts between albums and song to song, have become something of a signature.

“We made it so we can do what we want, which is exciting because we don’t need side projects. I don’t need to get out this techno-sci that I’ve always wanted to make because it doesn’t fit into Liars. It does if we want it to! If we want to make a Chinese pop album or a straight up metal grind core album, we can because we don’t just do one thing.”

The hard work and creative courage of Liars appears to be paying off in dividends, as they will be opening for Radiohead this week at the Hollywood Bowl. Their improbable rise to fame marked by so much experimentalism gives their unique working philosophy some credence.

“If there is one thing I’d want to say [to the public] is that it’s OK to fail,” says Gross. “It’s good to fail. You learn more from failing than you do by succeeding.”