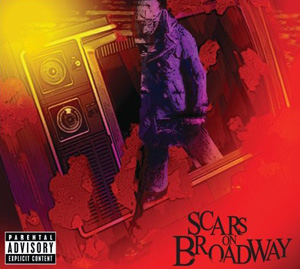 In the newest chapter of the post-SOAD tug of war at success, comes Scars on Broadway. The side project turned main focus of guitarist Daron Malakian and drummer John Dolmayan essentially picks up where Mezmerize/Hypnotize left off. The eccentric and sometimes obnoxious side of SOAD is prevalent in this debut output.

The lyrics hardly make any sense, unless you have the music accompanying them, and themes involving drug use and insanity are overused in almost every song. It’s no secret that in the world of rock ’n’ roll some of our favorite musicians have indulged in some drugs, but to put it so centerstage and almost glorify it seems to bring the quality of their musical output down.

But there are some interesting moments. Numbers like the politically charged “Exploding/Reloading” and the catchy “Enemy” offer enough redeeming value to an album that hardly has enough interest to run as long as it does.

Scars on Broadway is currently available.