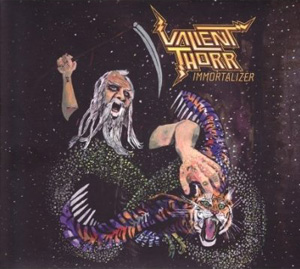 Valient Thorr’s wild-and-wooly frontman, Valient Himself, has always been known for giving his all to his music. He’s been shut down for a couple of months lately giving something even more precious – a kidney to his ailing father.

But the singer is recuperated now as the band sets out to tour behind their latest collection of unabashed hard rock. Voiden Thorr has joined the band as second lead guitarist behind Eidan Thorr, and the twin axes crank out riffs that will ring familiar to fans of everyone from Megadeth to Lynyrd Skynyrd, AC/DC to Jimi Hendrix.

Valient Himself sings with urgency throughout and occasionally with anger as on the anti-war tune “I Hope the Ghosts of the Dead Haunt Yr Soul Forever.” The album closes with the thundering thrash cut, “Tackle the Walrus,” with the band sounding delightfully demented as they shout the chorus “tackle the walrus/beware of his tusks!”