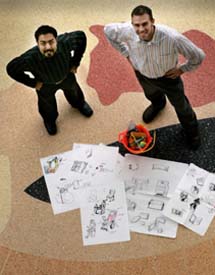 When software maker Intuit Inc. decided to create a Web site to help young people use its Turbo Tax program, the company turned to two University of Wisconsin-Madison students for ideas on how to appeal to Generation Y.

Anand Chhatpar and Nate Altfeather went to work. The students, founders of BrainReactions LLC, held a two-hour brainstorming session with people they deemed to be the most creative on the Madison campus. Participants got money and pizza for their ideas.

Two days later, a list of ideas, sketches and an executive summary were sent to Intuit. A DVD of the session followed two weeks later.

Intuit used the ideas. For instance, the session found that people ages 18 to 24 connect better with symbols than words, said Michael Maron, director of Intuit’s ttrefund.com, a site that helps young taxpayers learn to use Turbo Tax to prepare their taxes.

"We’ve done focus groups at other colleges, but what’s great is they have the process down and do a great job of recruiting people from different areas of the university," Maron said.

The company uses its founders’ campus connections and mathematical formulas to determine how to staff each brainstorming session and evaluate participants.

The sessions are designed to harness 150 to 200 student ideas so companies can capitalize on them. Students go through a screening process and must participate in one test run before they can become paid as what the company calls idea generators.

BrainReactions, started in July, has hundreds of student idea generators in its database and more than 10 clients that include Intuit and Bank of America, Chhatpar said. He said the company is profitable, although he won’t disclose numbers.

Before starting BrainReactions, Chhatpar, a senior computer engineering major, organized informal brainstorming sessions with friends to solve problems for engineering contests – or just for fun. During two summer internships in Pitney Bowes Inc. in the Shelton, Conn., office, he also had learned how important it is for companies to get new ideas.

So when Altfeather said after a brainstorming session that he thought they should try to deliver ideas from such sessions to big companies, Chhatpar was all ears.

"Anand is just passionate about ideas and making ideas mean something – and that’s the whole foundation for what he’s got going now," said Tom Foth, a research fellow at Pitney Bowes who specializes in innovation and an adviser to BrainReactions.

Chhatpar, 23, and Altfeather, 25, made previous forays into the business world. Chhatpar started a company that made a binder students could use to carry books in their hands, but it folded when his business partner got a job in Chicago. Altfeather started a prototype of a competitive rowing machine and was close to securing financing, but his partner graduated and had to go back to Australia.

BrainReactions has been doing brainstorming sessions for non-profit groups at no charge to gain exposure. The company normally charges between $10,000 and $20,000 for a session, depending upon the package the customer chooses, Chhatpar said.

Customers get a perspective that often isn’t otherwise available, Chhatpar and Altfeather say.

"It was really very helpful to have a whole set of ideas ranging from the possible to not possible – they were very creative, and it was a good reminder to get outside the box," said Eden Rock, executive director of Global Citizens Network in St. Paul, Minn., a not-for-profit group that organizes expeditions for people who volunteer time and labor for a good cause.

BrainReactions finds students for its brainstorming sessions through campus contests or by asking professors and teaching assistants to identify the brightest students in their classes. Along with money, participants get pizza, a boisterous experience many find stimulating, and a chance to meet other bright students on campus.

"How many sophomores actually know someone who has a PhD in physics," said Nick O’Brien, a sophomore who has participated in many Brain Reaction sessions. Last week O’Brien with two other students won the $10,000 first place award in UW-Madison’s Schoofs Prize for Creativity contest for a transmitter-and-receiver system that can help guide firefighters out of smoke-filled buildings.

Student brainstormers also get exposure to companies that might be looking to hire by being in the DVDs of the sessions BrainReactions customers watch, said Quilen Blackwell, a sophomore history major.

To Blackwell, the benefits students and customers both receive add up to great potential for BrainReactions.

"This company could seriously take off in the next five to 10 years," he said. "If you’re getting Fortune 500 companies interested in your brainstorming product, the sky is the limit, basically."