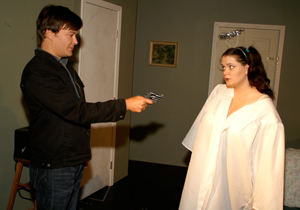 A flu epidemic ravages a small town community theater, but the show must go on in Greg Glienna and Mary Ruth Clark’s comedy, a raucous romp about a disastrous theatrical production of a play with the same name. The eponymous production is plagued with problems: A phone rings and the actor reaches for it, but the prop isn’t there; a stage light bonks an actor on the head, and all sorts of merry mischief ensues.

It takes a truly gifted actor to pretend to be bad. Glienna (writer/actor/director/producer) is genius-level bad, portraying Louie DeFazio, the two-bit hoodlum wracked with anger and pain. Watching Murphy’s Law in action is hilarious at the hands of these deft actors, particularly Kipleigh Brown and Mandi Smith.

Glienna proves that suffering can be sweet.