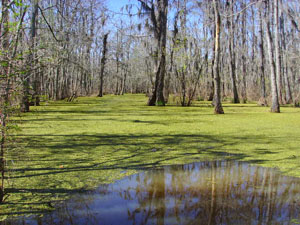 There are two things that are very enjoyable and very easy to find in Louisiana’s Cajun country – good food and great music. You really can’t go too far without being tempted by regional specialties like gumbo, jambalaya and crawfish etouffee.

A hunger for the area’s distinct style of music is easy to satisfy too; many of the places that serve the above-mentioned feasts also have a Cajun band on hand, so you can kick up your heels after you polish off that plate of catfish. There is, however, one must-see item in Cajun country that is a little bit harder to find – the king of the bayou himself, the alligator!

Cajun country can be loosely defined as most of Southern Louisiana, and many of its joys can be experienced as easy day-trips out of New Orleans. Less than an hour from the Big Easy is Slidell, where an opportunity to meet-and-greet Mr. Gator and his family awaits.

At Honey Island Swamp Tours the two-hour cruise begins on the West Pearl River; the flat-bottom boat eventually turns off into an adjacent bayou for a slow float deep into the wetlands. This is where the critters come out.

Egrets stand sentry amongst the cypress trees as a bald eagle patrols overhead. Snakes and lizards lurk half-concealed in Spanish moss, while turtles line up along the length of a log protruding from the water.

And yes, there he is: a sleepy-eyed alligator hanging out and posing for pictures like he doesn’t have a care in the world. His buddies bask just down the bayou, while nearby some of the kids, a bit skitterish, jump into the water and swim out of sight.

None of these fellows has anything to worry about though; the Honey Island Swamp is permanently protected as part of the Nature Conservancy’s First Louisiana Nature Preserve. Soon we’ll encounter gators again, but in a completely different way.

The Louisiana State Capitol building in Baton Rouge has the distinction of being the tallest capitol building in the United States. Visitors can ride the elevator up to the 34th floor to an observation deck that affords an unobstructed view of the city and the mighty Mississippi River.

History buffs may remember the story of how Louisiana Governor Huey “The Kingfish” Long was shot in the capitol building in 1935; in the hallway where it happened you can still see the bullet holes in the wall. The Louisiana State Museum is in Baton Rouge too, and you could easily spend many hours there.

This is not a stuffy place; the state’s history and culture are explained in vivid detail including with a whole Mardi Gras section that features lots of costumes vintage and modern. Music fans are rewarded too; a large area honors homegrown musicians like Jelly Roll Morton and the Marsalis family, and there are in-depth displays covering Cajun, Zydeco, swamp pop, ragtime and blues music. Where else will you see a jacket worn on stage by one of rock’s early heroes, Fats Domino?

All of this excitement will of course work up an appetite and that means its time to head to one of Baton Rouge’s most beloved eateries, Boutin’s Restaurant (8322 Bluebonnet Blvd.). Boutin’s is a Cajun restaurant and dance hall, and they have a reputation for excellence in their menu and in their entertainment.

The large dance floor in the middle of the place is elbow-to-elbow as the band works their accordion-and-fiddle magic, while pile after pile of crawfish gets devoured at nearby tables. And here we see him once again! But alas, this time Mr. Gator has been cut into chunks and deep fried.

I know what you’re thinking, but actually the alligator served in restaurants here is farm-raised for the table and not just snatched out of the swamp. The part that people eat is the tail meat, and it is considered by many to be a treat. Does it taste like chicken? You’ll have to order some and find out.