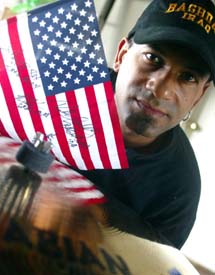 At first it was just another job. Now Jon Bullock can’t get enough Iraq.

Bullock, 38, of Fullerton, Calif., has been nearly blown up by mortars. He’s been knocked on his butt by helicopter backwash. He’s commuted to work in Fallujah sitting beside men pointing 50-caliber machine guns out open doors.

Bullock is one of dozens of California musicians who’ve become nearly obsessed about playing for U.S. troops in Iraq. It’s the camaraderie, they say. The opportunity to witness history. The feeling they get when a service member thanks them for risking their lives to come play music.

"I don’t know anybody who comes back with the same outlook on life," says Bullock, preparing for his third trip to Iraq in a year with his band, Off The Wall. "It’s not about war, really, so much. It’s about each man and woman over there. It’s just something I feel I was meant to do."

Meant to do. Strong words from a guy who was never military-minded, who didn’t agree with our reason for invading Iraq.

"I’ve played for 8,000 people before, and it was nothing compared to some of these shows we did," he says. "It was just that you could tell these people really, really appreciated you, you know?"

"Unless you’ve been there, you don’t realize how good your life is," says Bill Davis, 53, of Newport Beach, who was chosen entertainer of the year in 2000 by the California Country Music Association. "The troops kept saying, ‘Thank you, thank you for coming. We know you sacrificed to be here.’ But I wasn’t sacrificing anything compared to them."

The road to Iraq for Southern California bands was paved in 2000 – three years before the U.S. military arrived. Back then, U.S. troops were keeping the peace in Bosnia and Kosovo, while an Upland booking agent was looking for bands to entertain them. One of the first groups signed for Bosnia and Kosovo was Bullock’s Off The Wall. Bombs were still exploding. Fighting flared. All Bullock knew was that he’d earn $2,200 for two weeks.

"We were on this big, cushy tour bus watching movies," he says. "One day, I looked out the window, and there was this guy sitting on a Humvee with a 50-caliber machine gun, riding in 10-degree weather, just protecting us. It was snowing and the wind was blowing his parka. I almost started crying, you know – this guy is protecting my life just because I’m a freaking musician."

In the past five years Bullock, who also works as a soundman at the Cerritos Center for Performing Arts, has made more than 10 trips to Bosnia, Kosovo, Macedonia, Germany, South Korea, and Iraq. This May he’ll return to Iraq for another month-long tour. He gets paid but a fraction of what he earns as a musician here. His band lives, eats and sleeps with troops. And now it travels by Black Hawk or CH-46 helicopter – at night.

"They fly low and fast, then all of a sudden they rush up fast to clear an electric pole or tree, then they’re back down," he says. "It’s nerve-wracking."

The payoff starts when the band performs, playing songs such as "California Love," by Tupac Shakur, "Freedom," by Jimi Hendrix and "Keep Rockin’ in the Free World," by Neil Young.

"If I don’t come off that stage totally exhausted, I didn’t do something right," he says. "They’re standing, yelling and screaming. It’s just chaos. Nuts."

In a way, that’s just beginning. Because that’s when the camaraderie kicks in.

"They say, ‘You don’t have to take time out of your life to come over for us,’" Bullock says, turning serious. "They appreciate that. I feel like it’s something special, very special. And I feel it even more so when we’re not performing."