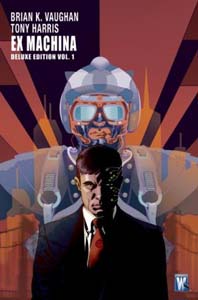 What if a superhero was elected mayor of New York? If the one answering that question was anyone less talented than Brian K. Vaughan, the result could’ve been disastrously corny. Luckily, Vaughan (Y: The Last Man) has intelligence and skill to spare.

He uses the high concept premise as a springboard to address pressing social issues in a post-9/11 world, from terrorism to censorship to gay marriage. Sound even worse? Not to worry, Vaughan is a pro.

He couches these complex issues in political intrigue and reality-based superhero action, rather than just using the mayor as his personal mouthpiece. Put simply, it’s just a really entertaining story – that happens to have something to say.

The first volume of Ex Machina is now available in a beautiful deluxe hardcover edition.