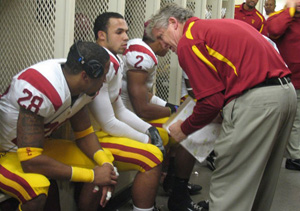 Trojans Itching to Get on the Field

Fans of college football have been informed of the rash of preseason injuries affecting teams all over the country. Georgia, Florida, Auburn, Oklahoma and UCLA have all made headlines by having star players sent to the sidelines, but an epidemic of sorts has been plaguing the USC team.

Twenty-five percent have contracted what’s seen in medical dictionaries as tinea cruris, but is more widely known as jock itch. The jock itch outbreak is being attributed to new compression shorts that are being worn under the uniforms. All players are expected to fully recover in time for the Virginia game.

Forbes magazine recently listed the five most underpaid and overpaid college football coaches. It calculated a formula using the team’s performance from the past three years combined with the coach’s 2007 salary. Pete Carroll was listed as the fourth most underpaid coach after Ohio State’s Jim Tressel, Mike Riley of Oregon State, Wake Forest’s Jim Grobe and ahead of Virginia Tech’s Frank Beamer.

Fanblogs.com used the computer formula that’s used to determine the BCS football rankings to rate each conference in football. The Pac-10 rated second after the SEC, winner of the past two BCS championships with LSU (2008) and Florida (2007). Rounding out the top six were the Big 12, Big East, ACC and Big 10.

It Really Does Have Articles