The Political Mind:: Why You Can’t Understand 21st-Century American Politics With An 18th-Century Brain (Viking) 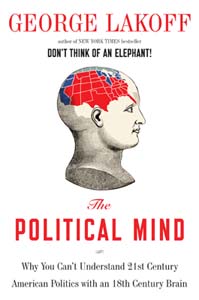 Like fellow linguist Noam Chomsky, George Lakoff has turned his understanding of how the human mind operates toward an arena that often seems to defy logic: politics. A tad academic at times, Lakoff still manages to lay out many compelling ideas, while shedding some light on the many infuriatingly contradictory positions Americans take.

Why, for instance, do poor Republicans support a party that props up multinational corporations, which stifle the working class? Why are pro-lifers so adamant about preserving all forms of life and yet support the death penalty and harsher prison sentences? Perhaps most pertinent: why has the Democratic Party failed to incite voters despite all of the egregious failings and malfeasance of the Right?

This is a vital book that goes straight to the center of that frustrating, nebulous (perhaps oxymoronic?) thing called American consciousness.

The Political Mind is currently available.