Just Dancing: A Bit Of Freedom And Self-Expression, Or Just Plain Cheating? 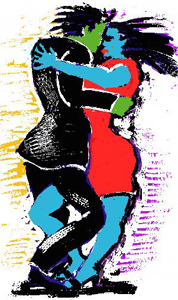 I find myself outside, slouching low upon an almost-comfortable, red, plastic chair, my cap draped over my face, arms folded and legs propped upon another chair, a smirk and a grimace simultaneously upon my covered face. It is an event torturous enough to allow me the pleasure of martyrdom.

I find myself outside because inside is worse. Inside the fraternity house, in a room too small for a dance party, they are, unfortunately, having a dance party – but not just any dance party.

This Friday night the frat house is hosting a “Red Light-Green Light” party. Those wearing green have no significant other (Go!), and those in red are in a relationship (Stop!).

I’ve been sitting outside pretending I was somewhere else, away from the mass of people inside all doing their very best to rub their bodies against other people. With each passing minute I become less inclined to smile.

I came as I have gone to previous dances at my college, hoping to find some redeeming, perhaps even enjoyable aspect. My boredom is becoming intense. I push my cap back up to its usual position atop my head and stand up.

Another failed effort to enjoy an Occidental College dance. I like dancing – this isn’t dancing.

Unfortunately, escape lies beyond the 30-foot thick wall of sweaty, gyrating bodies. I resign myself with a frown, accepting the inevitability of the next minute or two, and sidle my way into the outskirts of the crowd.

The mentally impairing music makes all else inaudible. The red-green premise seems to have broken down, or perhaps never applied.

“It’s just a dance” some might say. However, I don’t see much dancing going on. All around me, smashed together like clothing in the most accessible bureau drawer, I see girls and boys in red sharing their sweaty bodies with others in green in an impressive display of torso/hip-rubbing.

Directly in front of me is a solid wall of pulsating hips rubbing against one another. All around me personal space has been reduced to the width of one’s clothing, while the, shall we call them “dancers,” are doing their best to look sexually satisfied.

I remain stoic and uninterested, and try maneuvering left. A few moist hips later I come to another impasse.

I’m in a tight knit group of mostly girls and a few boys endeavoring to eliminate breathing room – and quite succeeding. Most of the girls seem content to move their lower extremities around and wave their arms.

Trying to pry my way out, I become annoyed thinking about the otherwise attractive girl in the red dress and the other red clad people around me. Do their respective “significant others” have no issue with them grinding and massaging perspiring body parts with other sexually aroused people, or does the “just dancing” rule apply – hazing over the actuality of what’s going on?

I push and shuffle sidewise. Why is the literal act of grinding and groping people outside of one’s relationship OK if it’s on the dance floor?

I slide right, and, as if to drive my thoughts home, am confronted with a red/green couple that have managed to obtain a greedy foot-wide perimeter around them. Expressionless, I gently shove by, getting momentarily crammed between the orgasmic female and a short, sweaty male.

I’m surrounded not by mature young adults flirting, getting to know each other and having a good time at a dance, but rather a bunch of grown-up kids who missed out on the “maturing” part and went straight for the sex drive part. Or maybe they just like dancing, and this is the way everyone else “dances” these days? But when did cheating become OK so long as everyone else was doing it?

Nearly at the exit now, I find before me one last couple, this time both in green. I see all my fellow students around me, and I feel disappointed and sad.

It makes me wonder just how many of these “young adults,” these crotch rubbing and ass bumping “college kids,” will, 10 years down the road, look back on these years of their life and think, “Wow, I wish I had rubbed my privates against other peoples’ privates more often,” or wish they had hooked up with more guys or girls, or gotten drunk and wasted more often. And of those with no regret, how many of them will be the kind of people whom we admire – the kind of great people we wish there were more of?