College:
The Teen Sex Romp Gets A Makeover 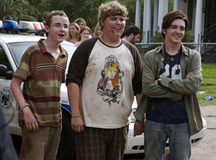 Drake Bell “bros-up” with former “American Idol” singer Kevin Covais and Andrew Caldwell in this bawdy comedy about three high school friends who visit a local learning institution as prospective freshmen. While on the campus, the guys become honorary pledges to a group of frat boys who subject them to hellish “hazing” and torture, in exchange for granting them access to the school’s killer party scene.

On this quest for acceptance and coolness, these three wannabes encounter another rite of passage for teen boys: hot sorority girls (played by Haley Bennett, Camille Mana and Nathalie Walker). Even though the guys are still high schoolers, these lovely ladies assume they’ve already been admitted to the school and become a bit smitten with them.

However, when the frat dudes find out about it, the “freshmen” are going to have hell to pay. What culminates is a comic battle of wits that pits the big guy against the little guy, with the girls and respect as the ultimate prize.

Bell has come a long way since his days as the co-star of the hit Nickelodeon show, “Drake & Josh.” This young phenom has appeared in a number of high profile projects including, Jerry Maguire (opposite Tom Cruise), “Seinfeld,” and High Fidelity (he was the younger version of John Cusack’s character in the hit film).

Bell is also a highly skilled singer. He wrote the music that his character performed on “Drake & Josh” and also did the score for another hot Nickelodeon property, “Zoey 101.” On top of that, Bell has even toured in support of his independent music release, Telegraph, which he wrote, performed and produced.

Another musician on tap is Covais. Nicknamed, “Chicken Little” by fans of “American Idol,” Covais was a breakout star on his season of the hit reality program. His musical stylings carried him all the way to a coveted spot in the top 11.

After getting the boot from the competition, Covais made the rounds on all the morning talk shows like “Live with Regis and Kelly” and “The Ellen Show.” And like Bell, he has also toured the United States, appearing alongside other “American Idol” finalists in the show’s successful tour.

But the music doesn’t stop there; Bennett is also an avid singer and songwriter. She reportedly beat 600 other actresses to nail the role as Cora Corman in the Hugh Grant/Drew Barrymore romantic comedy, Music and Lyrics.

Caldwell may also be familiar to moviegoers. He has had a recurring role on the teen juggernaut, “Hanna Montana,” and appeared in Transformers as well as Drillbit Taylor with Owen Wilson.

In College, each of these young stars gains the opportunity to step away from past adolescent roles and into characters that mirror them in real life.

This is especially true of actor Ryan Pinkston. Once a bit player on MTV’s practical joke show, “Punk’d,” Pinkston rose to fame playing little boys when in actuality, he was already a teenager. In College, he sports a rockin’ mohawk and gives this trio of friends something to look forward to on their road trip to Fieldmont University.

What’s even better about College is that it’s being brought to the big screen by the producers of the hilarious Ryan Reynolds vehicle, Waiting. This is one team of filmmakers that is skilled at educating audiences about all things funny.

Whether you’re an adult reminiscing about the good ol’ days, or were simply too young to enjoy the irreverence of American Pie and Animal House during their successful first runs, College is the perfect way to celebrate the crazy, unpredictability of youth.

Special Features
Secret screenings. Redacted scripts. How they make the twists in ‘This Is Us’
90 views

Special Features
NBC has a novel solution to the dearth of female directors: Let them direct
367 views

Special Features
Virtually every film coming out this fall
727 views