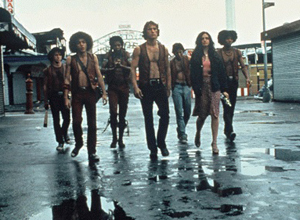 Truth: there is no better way to top off a hectic first few weeks of school than a midnight screening of The Warriors, and if it wasn’t showing at Nuart Theatre this Friday, I’d host the movie party myself. 1979’s cult classic takes you into a fictional world of New York City’s gangs where racially amalgamated turf-protectors wear matching themed outfits and no one (except the girls) owns a gun.

After the assassination of a local “warlord” during an attempted midnight truce summit in the Bronx, wrongfully accused Coney Island gang members must traverse the city’s intricate subway system, kick everyone’s ass in their way and make it home in one piece. With the five boroughs’ entire gang population after them, the plight of the pleather vest-clad Warriors is an epic 30-mile journey that finds them running to catch graffiti-torn rail cars, fighting other identically-dressed thugs and picking up a wayward woman with affiliations as loose as her morals.

It’s a tale so epic, “Rockstar” made a “beat ’em up” video game to explain its origins (levels 14-18, however, follow the movie plot). If that’s not enough, The Warriors – filmed over four months on actual gang-riddled streets in Brooklyn – showcases enough authentic afros, not-so-authentic Native American accessories and Yankee-uniform-and-multicolored-KISS-make-up looks to earn it a Rocky Horror Picture Show all it’s own.

So, get dressed up! Grab your official Swan action figure, get into your beat up hearse (but leave the baseball bats at home, please) and let Walter Hill’s turn-of-the-decade masterpiece make your weekend count. Can youuu dig iiiiiiit?