I Served The King of England: (Sony Pictures Classic) 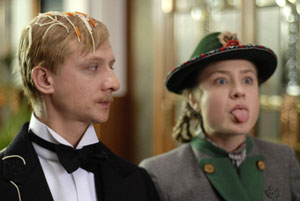 Be careful what you wish for is one of the main themes of Academy Award winning director Jirí Menzel’s quirky film about sex, the service industry and the spread – and decline – of Nazism in Prague.

Jan Díte is released from prison after 15 years spent behind bars, having been incarcerated for the crime of being a millionaire after the Communists assumed control. At a young age, Díte decided it was his dream to accrue tons of money and open a hotel, not knowing that it would eventually lead to a partial life of confinement. After he’s released from prison he’s sent to live in a decrepit border town where he reflects on his life’s journey.

The entertaining parts of this flick come in the form of Díte’s flashbacks to his eventful youth, including his stint as a waiter at a high-end brothel for rich industrialists and then again at the same establishment after Hitler takes the Sudetenland region, but this time as an attendant to young Aryan women waiting to be impregnated at a Nazi SS Research Hospital.

As Díte’s whisked off to jail, he comments how even in these darkest hours he was happy because he was “one of them (a millionaire).” And then he adds what might be the most valuable lesson we can learn from this film: Sometimes it takes great misfortune for one to humble oneself.

I Served the King of England releases in select theaters Aug. 29.