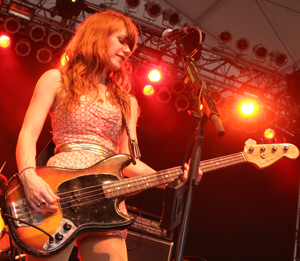 “I’m so boring.” Jenny Lewis said it herself, no additional context necessary.

She loves ice cream and koi fish, has a good relationship with her family and grew up in the suburbs of Los Angeles. She is the quintessential girl next door … if the girl next door was also the coolest kid on the block that every boy in a garage band wanted to date.

While both fans of her work as a solo songstress and as Rilo’s frontwoman can expect Lewis to bring her signature charm and sultriness, as well as her flair for intellectual verbosity to Acid Tongue, it was her approach to the recording process that brought her into uncharted territory.

“I guess I was a slave to the vibe,” Lewis says of her work ethic in the studio, “whereas in the past I’d come in with this very specific plan for what I wanted to do. With this record, it was about the relationship between the musician and the feelings that were created from that approach. If the take felt good or the vibe was right, oftentimes that made it on the record, while technical aspects became less important.”

With the decision to focus less on getting the perfect take in the studio, Lewis was freed to try some new techniques while recording in the hopes of achieving a more organic, natural sound. And what better way to do that than treating the studio as she would any stage with a full band behind her?

“I’d never really done that before,” she says of singing with a live performance frame of mind. “I did a little bit with Matt [M.] Ward on my last record. He really made me feel comfortable enough to play and sing at the same time, to get something in one take. With this, it was full band, full drums, and I was truly feeding off the energy of the band and singing my heart out.”

Along with her backing band, Lewis had a few guests stop in while she was recording as well, the likes of which include Elvis Costello and Zooey Deschanel.

“It was really lovely to be able to sing with Zooey. I think she’s a remarkable person and a true talent from another era. I feel like she’s kind of the good witch to my bad witch,” Lewis jokes.

Of course, if her friends were getting cameos, it only seemed right to have her family make an appearance on the album as well.

“My dad played on the record. He’s a great harmonica player, and my sister sang on a couple songs,” Lewis beams, adding, “We were recording in Van Nuys, where we grew up. It was pretty wild to be able to do that in the city where we first started listening to records together.”

Returning to her roots seemed the only way for Lewis to go with this album, which marks the culmination of a period of time in which “shit got weird,” as she jokes. Without getting into specifics, Lewis admits, “The two years of my life have been interesting. I think that time wasn’t as light as previous years. There was a definite heaviness, and I think that feeling is definitely present in some of the songs.”

Her music serving as every bit the cathartic process, however, Lewis would, of course, find her way and use her experiences to strengthen her musical resolve.

“I guess every heavy time feels heavier than the time before until you’re out of it. Then in hindsight, of course, you’re like, ‘Wait a minute, that was nothing,’” she says.

Admittedly, though, tapping into some of those darker places wasn’t always easy, either.

“Because of our approach to the songs and because we wanted to create a live atmosphere on the record, I think that emotionally, it was very draining,” Lewis says. “It was cathartic, and I was emoting in one complete gesture, whereas in the past I would record my vocals after the band, after we’d tracked the instruments, but this was about a complete take from start to finish. I was able to go through the levels of emotions in the songs and the narratives completely.”

While accessing those sides of herself proved challenging, Lewis certainly doesn’t shy away from it, regardless of any attached risk of vulnerability.

“Certainly it can be disconcerting at times if you really feel something and then you find yourself being misunderstood or misinterpreted, but I guess that’s just a part of the process,” she says. “If you’re brave enough to put yourself out there, then you have to be brave enough to accept criticism. As of late, I’ve realized that I’m not going to make music for everybody. That’s not the kind of music that I make. Some people aren’t going to like my music, and that’s OK. It’s also OK to piss people off with things that are unexpected. I’d rather have a terrible response than a mediocre one.”

Whether her musical efforts are panned or acclaimed, though, Lewis has learned to find satisfaction within herself before she looks for it in anyone else.

“I just follow the inspiration, and that guides me. I let the songs drive the car,” she says. “Throughout years of wondering about things, trying to please people for whatever reason, going against my instinct on something, it always comes back in the music, where if you’re loving what you’re doing and you feel proud of what you singing, then it really doesn’t matter who’s out there listening or how many people you’re going to reach.”

That said, Lewis isn’t above hoping her music can still have an impact on listeners.

“I have kids come up to me and tell me that they have struggled with depression and that somehow some of my songs have helped them a tiny bit. I really appreciate when people share that stuff with me,” she says. “I tend to use my songs as a self comforting method. Sometimes if I’m not feeling great, just playing music lifts me out of that, so it’s really nice to know that some of that intention makes it to the listener.”

Though the stories spelled out in her lyrics don’t always portray the life of the proverbial good girl, behind Jenny Lewis’s acid tongue is an intelligent musician who is nothing if not sweet as sugar.