Fall Music Preview:
Don't be a fool, abandon the pool, go back to school and check out some music this fall. 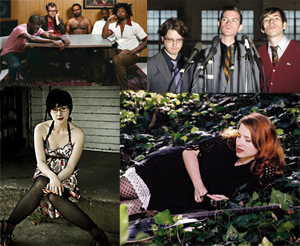 When we left for the summer, the new Walkmen record was title-free. As it were, you & Me was released Aug. 19, introduced at two shows at the Troubadour later in the week, and became one of the year’s best records. Meanwhile, dreamy New York cock-rockers Oneida released the rather kraut-ish Preteen Weaponry, part one of an album trilogy, at August’s start, while Wire finally announced a Los Angeles tour date (Oct. 14 at the Echoplex) and the Verve pushed forth a beautiful fourth record – ah, Forth – after an 11-year recording hiatus. Autumn, however, brings what will ultimately be the majority of the year’s best, as is the usual case with records hoping to sneak onto year-end lists.

Sept. 2 is when Seattle’s most dapper lads, the Dead Science, release Villainaire, a follow-up to 2005’s Frost Giant and perhaps their best, fit for the coldest of nights in Gotham City. Sept. 2 also sees Thought So... (Warp), a reggae-fied record from English DJ Nightmares on Wax, whose last was the sexy and fun In a Space Outta Sound in 2006.

One week later there’ll be Me and Armini from baby-voiced Icelandic/Brit singer Emilíana Torrini, who appears to be abandoning the acoustic detour that was Fisherman’s Woman. This writer’s preview notes say that the title track is diluted reggae crap, but “Gun” is a spicy effort that well reeks of Pulp Fiction.

If you’re a folky with the itch ... well, take a shower. Then look forward to Okkervil River’s The Stand Ins (Jagjaguwar), Horse Feathers’ House with No Home (Kill Rock Stars) and a debut from the Shaky Hands (Lunglight, Kill Rock Stars) – all available Sept. 9. Look to a debut from 18-year old Jessica Lea Mayfield, the Ohioan who sang for a bit on the last Black Keys record and – surprise – got Dan Auerbach to produce her record … at his ,i>home, the lucky bitch! With Blasphemy, So Heartfelt is due Sept. 16.

If steel guitars aren’t your thing, be on the lookout for a poorly publicized EP from Flying Lotus collaborator Gonja Sufi (Warp, Sept. 16), as well as double-CD set Future Chaos by Bomb the Bass (K7!), the first release from spacey electronic artist Tim Simenon in 14 years, with guest vocals from the likes of Jon Spencer and Mark Lanegan. Both Future Chaos and also Koushik’s Out My Window (Stones Throw) release Sept. 30.

The All Girl Summer Fun Band (including the Thermals’ token lady Kathy Foster) offers more cheeky summer pop via Looking into It (K) Sept. 23, competing with the Pretenders (!), whose unexpectedly rootsy Break Up the Concrete has been given away online, song by song, each week leading up to its release. This, of course, is also the date on which the much-anticipated Dear Science comes out, meaning TV on the Radio will be back on everyone’s year-end list radar, and Serena-Maneesh peer out of the Norwegian darkness for a moment to release the limited-edition Impregnated 12-inch.

No American dates yet, but if you’re up for import fees, Holly Golightly and the Brokeoffs (i.e., Lawyer Dave) are releasing their sophomore record together, Dirt Don’t Hurt, Sept. 29 (Damaged Goods). Coincidentally, this fall also sees I Swear Upon this Witness Stand, the first record in eight years from Golightly’s fellow ex-Headcoatee Ludella Black, also on Damaged Goods and with garage band the Masonics to back her. No date chosen as of press time.

October’s when things get really exciting – first up, Oct. 7 brings a few muttered somethings from Bob Dylan, with Tell Tale Signs, the eighth installment of his Bootleg Series, the Exclusive Deluxe Edition of which offers a third disc. There’s a new Oasis record, Dig Out Your Soul (’cause, hell – I care!). And there’s some new Jolie Holland, The Living and the Dead,/i>, which features M. Ward and former Be Good Tanyas band mate Samantha Parton, as well as Marc Ribot and a song called “Your Big Hands.”

But October is the month of plenty, and so the seventh also brings new records from Deerhoof (Offend Maggie,/i>, Kill Rock Stars) and one-woman indie band Ill Ease (Turn it Loose!, Ionik). The former contains one of the greatest living drummers around, and the latter is a lo-fi lady from Brooklyn, holding much in common with Vivian Girls, an all-girl garage punk band whose self-titled LP will be released on In the Red – you guessed it! – Oct. 7.

Perhaps most thrilling of all, though, is the new record by Grace Jones. Set for Oct. 27, Hurricane is produced by famous folks like Tricky and Brian Eno, and marks the stylish 60-year old’s first official release since 1989. Madness!