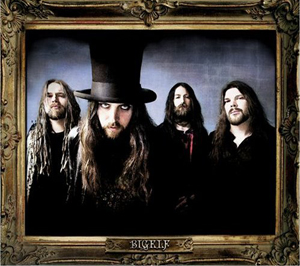 Originally from Los Angeles, Bigelf is the brainchild of singer/guitarist and self-described “impresario” Damon Fox. Along with the Mars Volta, Bigelf is a living, breathing homage to all things prog, preferably of the more psychedelic pre-1975 variety. But Bigelf is a band whose proggish ambitions are matched by their innovative songwriting and capable chops.

Cheat the Gallows showcases a lush, orchestral sound that fortunately never gets lost in overproduction. You can still hear a band that rocks under all those horn and string arrangements.

There’s an energetic mixture of early Bowie, Queen and Black Sabbath that runs through this song cycle. Low brass beefs up the already mean riffs of the first two songs. The midsection consists of several strong anthems, ending with the baroque epic “Counting Sheep.”

Those who can appreciate how hard Queen’s first few albums rocked will give a broad smile while listening to this music, which channels Brian May’s sense of groove and Freddie Mercury’s harmonic abilities, but happily ignores Queen’s early admonition against synthesizers.

With attention to detail like that on Cheat the Gallows, one can see that Bigelf is not referred to as the “Evil Beatles” for nothing. Where Lennon-McCartney chanted “Nothing is real,” Fox wails “No one is real!” on “Money, It’s Pure Evil.” Evil Beatles, indeed.

Cheat the Gallows is currently available.