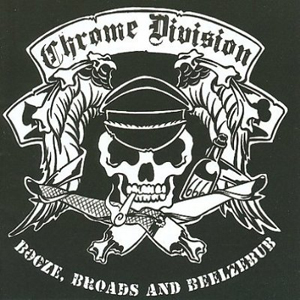 Ostensibly a “side project” of Norwegian black metal outfit Dimmu Borgir’s frontman, Shagrath, Chrome Division holds itself out as a simple yet hard rock ’n’ roll band. Perhaps putting out Dimmu Borgir records like Death Cult Armageddon was too heavy, for lack of a better word, but Shagrath and his buddies just want to hop on their Harleys for a Scandinavian good ol’ time.

In that spirit, they have distilled the long-standing metal obsessions with sex, drugs and Satan into, well, the title of this album, their second since the release of Doomsday Rock ’N Roll back in 2006. Unfortunately, this whole collection of songs tries much too hard to be “classic rock.”

The band’s Web site lists Motorhead and AC/DC among their formative influences, and Chrome Division has certainly captured those bands’ red-blooded male attitude, albeit grotesquely displayed on the cover in the image of severed legs in fishnet. What they missed, however, were those classic bands’ abilities to write infectious, gritty hooks into memorable songs.

Chrome Division’s macho kitsch falls flat in tunes like “Raven Black Cadillac,” in which singer Eddie Guz grunts, “Back seat is filled up with hookers/We’re riding with the Devil tonight.” Their straight cover of ZZ Top’s “Sharp Dressed Man” does reveal a sense of humor and earns them some points, if not a second listen.