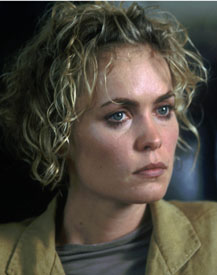 As part of his Spring 2005 "Reel Talk" series at the Westside Pavilion Cinemas in West Los Angeles, Stephen Farber – who writes reviews for Movieline’s Hollywood Life magazine – will show the upcoming film Melinda and Melinda, starring Will Ferrell, Chloe Sevigny and Radha Mitchell.

In the film, a woman named Melinda (Mitchell) wanders into a dinner party, and all of a sudden two different stories are created to help her sort out her life. This fits into the parameter of the film’s tagline, which reads: "Life can be a comedy or a tragedy, it all depends on how you look at it."

Along with the Melinda and Melinda screening, Farber will also be hosting a Q&A session with Mitchell herself, one of the film’s stars. Mitchell’s other credits include roles in Phone Booth, Man on Fire and, most recently, the part of Johnny Depp’s estranged wife, Mary Barrie, in the Oscar-nominated Finding Neverland.

Guests and films in the series are subject to change. Tickets are $15 per screening and can be purchased at the Westside Pavilion Cinemas box office or online via Moviefone. For more information, and for updates on future films, visit www.landmarktheatres.com.