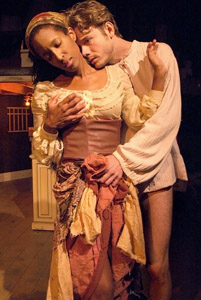 Somewhere in this world, somewhere in the past, lies the Roman house, where four people covering three generations dwell in uncomfortable rhythm. Sona Hess is the poetically incoherent grandmother, Roman C. Roman is the ever-angry father, Tera Roman is his very pregnant wife and Hess Roman is Roman’s grown son from an earlier union.

Tera’s baby may be the product of her marriage to Roman, or her hidden affair with Hess. War is impending, and we watch as the family basically disintegrates before our eyes, despite a visit from four entertaining circus cousins who provide the only pleasant vibe in this otherwise dour presentation.

This is a dark and messy play, and its inhabitants are messy people.