A Freewheelin' Time: A Memoir of Greenwich Village In The Sixties 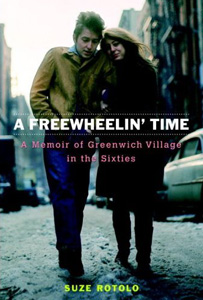 Call them muses, but for whatever reason there has always been a strange fascination with the female love interests of great artists. Fitzgerald had Zelda, Warhol had Edie Sedgwick and before he legally changed his surname to Dylan, 20-year-old Bobby Zimmerman had 17-year-old girl Suze Rotolo (pronounced Susie). Rotolo is mostly remembered as the girl clutching the cherub faced Dylan’s arm mid-stride in that snowy Greenwich Village street on the cover of Dylan’s breakthrough second album, The Freewheelin’ Bob Dylan.

A Freewheelin’ Time is her memoir of that magical place in New York that flourished as a creative mecca for the better part of two decades. Characters both big and small enter her life at various stages - some are famous (Woody Allen, John Lee Hooker, Bill Cosby), some are not (Dave Van Ronk, Alan Lomax).

But it is Dylan, who after nearly half a century, she is still asked about the most. Rotolo ended the relationship in the fall of 1963, just as Dylan’s fame was reaching meteoric heights.

“I could never be the woman behind the great man; I didn’t have the discipline for that kind of sacrifice,” she confesses.

A place in Bob Dylan’s shadow may never have sat right for young Suze Rotolo, but she certainly wrote one fascinating book about him.

A Freewheelin’ Time is currently available.