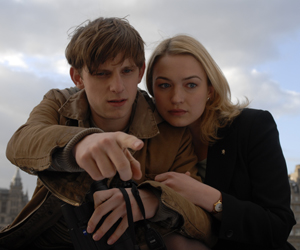 The year 2000 marked the dawn of the Jamie Bell era. This prolific young actor danced his way onto the scene with an unforgettable performance in Billy Elliot. He followed that up with touching turns in Nicholas Nickleby (2002), Undertow (2004) and King Kong (opposite Jack Black).

Now Bell is back with another classical character. Ladies and gentlemen, meet Mister Foe.

As 18-year-old Hallam, Bell brings to the big screen a young man as complex as Shakespeare’s Hamlet. After the death of his beloved mother, Hallam begins acting out against his stepmother, Verity (played by Claire Forlani). Convinced that she’s responsible for the death, he spends his days insulting her while skulking around and spying on the neighbors in his Scottish village.

After a heated confrontation with Verity, Hallam escapes to the big city. There, he meets up with Kate – a girl that looks just like his mom.

She gives him a job in the hotel in which she works. Soon, the two embark on a strange and charming relationship, marred only by his Oedipal complex and her extra-marital affair with an abusive hotel concierge.

The director responsible for extracting yet another inspired character out of Bell is David Mackenzie. His last truly controversial work was 2003’s Young Adam (which starred Ewan McGregor and was slapped with an NC-17 rating). While Mister Foe is ripe with sexual under- and overtones, Mackenzie is honest about his past with the MPAA and his hopes for this project stateside.

“I don’t really worry about the ratings but perhaps I should,” he says. As for working with Bell, Mackenzie contends that he is a fine talent and is quite thrilled with his performance. Co-star, Sophia Myles (Tristan + Isolde) loved the dynamic that Bell’s Hallam had with her character, Kate. She agrees with Mackenzie that he is one of the best that she’s ever worked with.

Bell describes the good times on set with similar fondness: “We just had a laugh,” he says with smiling enthusiasm.

Regarding their dysfunctional characters, these young actors are very honest about their feelings.

“This was definitely one of the hardest things I’ve ever worked on in my life, partly because of the demands of the schedule, but also for the physical side, the accent issues and the nudity that [was] involved and some of the sequences at the end were a bit traumatic,” explains Bell.

“I think that both of them have equal amounts of demons,” says Myles. “These characters, I think, find in each other a kind of life raft.”

Still, there is a certain level of empathy for Hallam and his journey that Bell remains tapped into.

“He’s someone who’s dealing with loss,” he says. And despite many descriptions of Hallam’s behavior as unusual or frightening, Bell defends him to the hilt.

“I don’t think he’s creepy, necessarily,” he explains. “I think he loved his mother very much.”

That love, to some people raises some serious eyebrows about this rather dark and amusing drama. Complex themes of adultery, murder, suicide, stalking and cross-dressing might not be the most common parallels drawn when thinking of Bell’s career.

Still, the 20something is adamant about taking those chances. He lives by the words bestowed upon him by his Flags of Our Fathers director, Clint Eastwood: “No bullshit. Just do it.” Bell hopes to continue to work with the best and brightest in his field. As does Myles. She looks to the cutting edge work of Tim Burton, Christian Bale and the Coen brothers for inspiration and hopes to one day collaborate with each.

But for now, both are still riding the wave of new experiences brought on by their work in Mister Foe – the movie that officially moves Jamie Bell into leading man status.