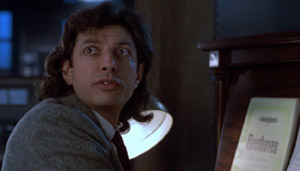 Be afraid. Be very afraid. The gruesome make-up and corrosive digestive-fluid spewing that made 1986’s The Fly a science-fiction success is hitting the stage with this month’s “The Fly: The Opera,” and in celebration, the American Film Institute is using its partnership with ArcLight Cinemas to bring fans a special mid-week screening, complete with pre-show Q & A session with director David Cronenberg.

A possibly mentally unstable scientist who figured out how to teleport inanimate objects becomes the victim of his invention when, in his attempt to become the first living subject to be transported, gets scrambled on the molecular level with a wayward fly. The result is a steady transformation, from minor acne issues to shedding crusty outer layers of skin, to reveal what could be an animatronic Men in Black prop.

Just as Jeff Goldblum’s botched teleportation pods turned him into an oozy, grotesque insect-man, Cronenberg has helped turn this body horror cult classic into a sweeping, dramatic opera. Calling it “a profound parable on love and loss,” “The Fly: The Opera” caught rave reviews after opening in Paris last year and hopes to garner the same when L.A. Opera presents it at the Dorothy Chandler Pavilion this week.

But tonight, ask Cronenberg why he cast Geena Davis (or where the hell he got the idea to turn a science-fiction horror movie into a legitimate opera), then enjoy the horrifying plight of Brundlefly – and Goldblum’s iconically creepy death stare – as it was originally meant to be seen: on the big screen.