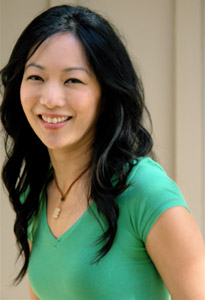 The soundtrack is funky. How did it come about?

Our music supervisor, Shaun Young, began supplying me with songs before we started shooting. We wanted a soundtrack that was upbeat, witty, infectious and beat heavy so we could cut to them. We knew we wanted some songs by Far East Movement. We were looking for other strong Asian-American artists, and Shaun found CHOPS. He also wrote some great stuff for us too – like “Chinese School,” which opens the film. My co-writer Jimmy Tsai and I sent CHOPS long e-mails with every Asian-American pop culture reference we could think of. They all made it in there … and more. (I love the line, “I don’ t call television racist, but I do watch ‘The Simpsons’ and ‘SpongeBob’ just to see some yellow faces.”)

Why did you pick ping pong as a sport?

One of our producers, Joan Huang, always thought ping pong would make a good subject for a comedy. It’s a sport that everyone has had some experience with, but it’s hard to excel at. No matter how hard you hit the ball, it’s still a hollow smack, it’s harder to be a macho badass at ping pong.

Do a lot of the stereotypes in the film come from personal experience?

All the characters in the film are based on people we know or have encountered in some way, but we also tried to poke fun at ourselves. Jimmy and I both grew up in culturally aware Asian-American households, and we know that being aware can lead to being hyper-sensitive. So we felt that some of the humor had to come out of C-dub’s tendency to use his Asian-American identity as both a shield and a bludgeon, as it suits him. It’s one of the things that first drew me to the character … he’s smart, funny, but also a tad hypocritical. It seemed like the time had come in Asian-American cinema when we could have a main character who is, well, kind of obnoxious.