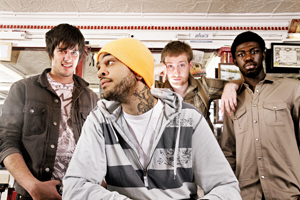 Gym Class Heroes have had a big year behind them, between their ever growing popularity and the touring demands required to keep that momentum going. What started off as a slow buildup with most mainstream outlets being less than timely in realizing Gym Class was worth their while quickly turned into the Geneva, N.Y. natives skyrocketing into public consciousness with their unique blend of punk, rock, funk, pop, soul and hip-hop from eras past and present.

The last instance drummer Matt McGinley recalls of having time off consisted of only one singular day, and how did they spend that day? On an airplane, in transit to their next engagement.

Needless to say, they’ve had a lot going on, but nevertheless, McGinley – along with guitarist Disashi Lumumba-Kasongo, vocalist Travis McCoy and bassist Eric Roberts – has even more yet to come, starting with the release of the band’s latest album, The Quilt. As the follow up to 2006’s As Cruel as School Children, which spawned “Cupid’s Chokehold” (a.k.a. the official backing track for any and all daily activities in 2007), surely there’s a lot of expectation for their fourth studio album.

Well, from everyone but the band members themselves, that is.

“Coming out of the gate, we were pretty different from a lot of what was out there, so I think because we have a unique dynamic in the band, it makes things easier in terms of having expectations,” says McGinley. “I think most of our fans like us because we’re doing something outside the box, and as long as we stay creative, we’ll continue to be around.”

While McGinley may jokingly profess a love-hate relationship with being on the road, it was a change of setting and being on the opposite coast from their home that brought their best work out of them.

“When we were doing As Cruel As School Children, we were recording in New York, and all of our management was there, our label, all of our business. I think it kind of clouded our headspace at times. When we did The Quilt, we moved to L.A. for a month and a half, and it was great. We don’t really know a lot of people out here, and I think it helped us to be a lot more focused and relaxed when it came to writing and recording,” he says.

“That’s what I love about being in a band like Gym Class Heroes, that we all get the opportunity to try it all musically. We’re not expected to do one thing and we haven’t boxed ourselves in.”

Just when you think you’ve got the genre benders pegged down, McGinley and his band mates pull some old school arrows out of their influential quiver, many of which predate some of their fans’ births.

As McGinley says, “With this album, I feel like we have a couple songs that channel the Beach Boys’ Pet Sounds era. They’re happy as shit and some of the greatest songs that we’ve done.”

While they might be channeling some more lighthearted influences, that’s certainly not to say they lack depth.

“Travis has a song he wrote the lyrics for that blew me away. It’s a super personal song about his relationship with his father, and it definitely strikes a chord with me,” says McGinley. “Some of my favorite moments that Travis has lyrically are when he does songs that are narrative. It’s really cool insight to see how other people think, and that’s one thing that’s always drawn me to his lyrics. They’re serious, but there’s a humor value to a lot of them as well.”

As anyone who has met the four protagonists of our story can attest to, that same balance is something they carry into all aspects of their being, matching a serious work ethic with an infectious passion for making their jobs fun. And as fiction throughout history dictates for those in possession of that skill, whatever beasts fate may throw their way won’t stand a chance of deterring their smooth sailing.

The Quilt will be available Sept. 9. Gym Class Heroes will perform Oct. 17 at the Palladium, Hollywood. For more information, visit www.gymclassheroes.com.