What They Don't Teach You In School: Student Entrepreneurs Earn Money As Well As Degrees 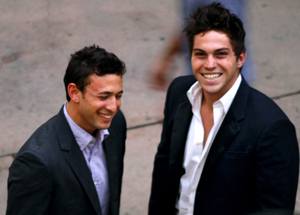 He was always the kid with the lemonade stand. And when life handed Andrew Citores lemons in 2006, he took them and ran.

“I’ve always had an interest in starting new businesses,” Citores, who is on a leave of absence from Loyola Marymount University, says. “I probably got it from my father who is a big entrepreneur.”

It all started during Citores’ freshman year. He bumped into some guys who were walking around campus promoting an event and offered to help them out. They paid Citores $20 and told him to spread the word. And when Citores showed up at the party with 30 of his friends, he was asked to help out with the next one.

“For a freshman who didn’t have a job and whose parents didn’t give him much money it was great,” Citores says looking back on it.

But the glory quickly faded when Citores brought out the majority of a second party and received nothing but a little pocket change.

“It seemed unfair that I was doing all the work while the other guys took the credit,” Citores says. “They basically had their name out, got all the recognition and it boosted them.”

Citores, an experienced businessman and partygoer himself, decided to take matters into his own hands. He pulled out of the crooked deal and started his own event planning and promotion venture. What started as a hobby turned into a pretty penny-making business.

“I saw a huge market of people who wanted to go out and party,” Citores says. “The 18 to 24-year-old market is very profitable for any product that caters to it.”

Citores noticed that students were tired of going to the same house party or fraternity night after night. So, he started planning his first event two months in advance. He booked the venue, the DJ and a team of people to help out.

“I was really nervous because the first event is always the most important,” Citores says. “It was the make or break event.”

They handed out flyers the week before at various schools and did everything they could to get the word out. And they succeeded. On the night of the event, there were 725 people in the door and over 200 that were waiting outside.

“I realized I can be successful in doing this,” Citores says. “It gave me confidence to do new things and venture out.”

With a few great events under his belt, Citores got a job at SBE and started doing events with some of the best promoters in Hollywood. He learned more about the business and started beefed up his Rolodex.

Seth Cohen, a business major and budding entrepreneur from USC, was also working at SBE when he met Citores. Cohen’s learning experience at the company, coupled with contacts he made as social chair of his fraternity, allowed him to tap into the college market and event planning business.

“Realistically speaking, I should have created a corporation or LLC,” Cohen says. “There is a lot of responsibility and liability in this business.”

Like Citores, Cohen realized that a typical night out at USC meant hanging in the frat house with his buddies. But after a year of the dull routine, he was motivated to break up the social monotony.

Cohen usually works with one or two partners to throw large-scale events. He and his team gather students from UCLA, USC, LMU and even some from Chapman and Pepperdine to experience something new in Hollywood.

The novelty of their business is that transportation to and from the venue is included. Students no longer have to worry about blowing through $40 on cab rides or getting caught in a drunken driving situation. They are guaranteed a safe, secure and fun night for a budget-friendly price.

“A lot of people don’t realize how much work it is,” Cohen says. “Event planning and promotions consumes a lot of my time and, after being on the phone for eight hours straight, it can get overwhelming and frustrating.”

Before Cohen and Citores can do anything, they have to come up with a concept. Do they want the party to be 18+ or 21+? Do they want sponsors? Should they hire other promoters? How big is the event going to be?

Once these basic questions are answered, they begin planning their brainchild. They walk through the hottest nightclubs in Los Angeles to see what would be the best fit for the event. It’s all about negotiations and figuring out how to get a great deal for the club and for themselves.

“Another big thing is getting sponsors, companies and magazines to want to jump on board,” Cohen says. “It allows the sponsors to get their names out for free and makes us more legitimate.”

For every event, they guarantee a certain amount of money will be consumed at the bar. If Citores and Cohen cannot live up to that quote, the remainder comes out of their own pockets.

In order to meet the demands of the contract, Citores and Cohen put in about 100 to 150 hours of work before the event actually happens. On the day of the party, they confirm that the venue, DJ and sponsors are all on the same page and ready to go for the night. But the most stressful part is getting a good crowd.

“Most people don’t understand how much time I spend on the phone,” Citores says. “I don’t do the mass texting thing. I really like to be personal and cater to my friends.”

Citores and Cohen have developed their name by building a solid clientele rather than a series of one-time audiences. Through repeat business, the same people come to all of their events and have become close friends.

“In the long-run, I may not be doing event planning and promotions,” Citores says. “But I know I’ll always have those people in my life no matter what I’m doing.”

But for now, Citores and Cohen are going to take their starry-eyed optimism and run with it. They are both planning to work with sororities and fraternities at USC and LMU.

“A lot of the social chairs of the houses are not as experienced and tend to get a lot of venues and transportation services that overquote them because they don’t know what’s fair,” Cohen says. “We’re going to try to throw their events below their budget so they can put the rest of the money toward charity or other projects.”

Citores has also been successful with his Tuesday night parties at the Custom Hotel hitting capacity each night with an incredible crowd. He is currently working on launching a limo agency that will cater to his friends and student clientele in Los Angeles. The idea is to give students the opportunity to have limo service for a special night without paying the expensive price tag.

Through that service Citores will also be able to bring his bar-hopping plan to life. On Thursday nights a bus would be shuttling in a constant circle from campus to a couple of bars in the area, and back. His goal is to connect all of the college campuses in L.A. for a fn night each week. “I love creating something out of nothing,” Citores says. “And when people come up to me and say, ‘I had a great time tonight’ … there’s just nothing better than that.”

For Cohen, this is simply a fun way to meet people and make some money. It’s a legitimate, profitable business, but he doesn’t see it as a future career. Cohen is currently interning at Wachovia and trying to stay focused on his education.

Citores, on the other hand, is taking it one step at a time.

“I never anticipated this,” he says. “But life throws you curve balls, and I figure, if I’m good at it, then why not stick with it?”