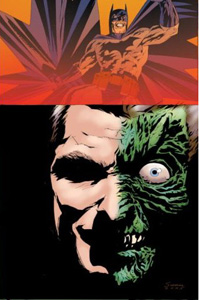 Paul Jenkins (Civil War: Front Line) attempts to create a Killing Joke for Two-Face, the ultimate exploration of what makes the villain tick. Jae Lee and Sean Phillips provide some of the darkest artwork in Batman history – gritty, washed out, with a tone reminiscent of Se7en – as Batman travels like Dante through Harvey Dent’s fractured psyche.

The story, while using the familiar plot device of poisoning the water supply, is really more interesting than that. Two-Face has developed a serum that would eliminate his sane half and end his tortured existence.

Meanwhile, he’s testing it on the citizens of Gotham, driving ordinary people to homicidal mania. Batman is his next target.

Jenkins explores Dent’s childhood and fleshes out the cause of his madness. Meanwhile, Batman confronts his own two-sided nature.