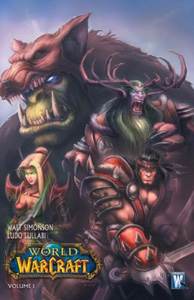 Walter Simonson adapts the videogame franchise in which orcs, humans and elves do battle. Over several installments of the game, the creators at Blizzard have built an impressive, ripe universe from which to draw for this first graphic novel adaptation. Perhaps that’s why this book comes as somewhat of a disappointment.

The story is the same gladiator tale we’ve seen so many times before. An orc warlord controls a group of gladiatorial slaves who travel to tournaments, fighting to the death. When the troupe, made up of various elves and orcs, find a deadly human with amnesia (another clichéd plot element), they force him to join their forces. However, there’s a secret to this human’s shadowy past.