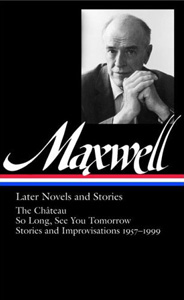 In her memoir of William Maxwell, included in a book that’s been remaindered and goes for something like $5 (A William Maxwell Portrait, edited by Charles Baxter, Michael Collier and Edward Hirsch), Donna Tartt writes: “I was used to literary lions who behaved like lions: boasting, sprawling, sulky, unpredictable in their whims and enthusiasms, apt to roar (and sometimes pounce) if roused. But – as I soon discovered – Mr. Maxwell was a lion of a different and finer order: no man-eater, but an Aslan.”

It’s a bracing and enjoyable essay about a man who was, by almost every account, an impeccable and enjoyable human being, a lover of literature who confided in Joseph Mitchell, the great reporter (and progenitor of what is called these days “creative nonfiction”) that his only regret in dying was that he couldn’t read Tolstoy. Maxwell haunts many memoirs; in Home Before Dark Susan Cheever recalls her father’s anxiety over whether or not he would accept one of his short stories at The New Yorker – Maxwell was fiction editor there from 1936 to 1975. But it’s almost always as a benevolent spirit, a guiding light, an example of what a man or woman of letters should be (but almost never is).

In handsome and handy volumes the Library of America has collected Maxwell’s novels, short stories and selected bric-a-brac, charting his growth from confident 26-year-old novelist (Bright Center of Heaven is a novel packed with breathtaking moments about a boarding house of intellectuals and artists resembling the characters in The Royal Tenenbaums) to wise, exquisite prose writer, explorer of the human heart, Aslan and Gandalf in one.

At the end of Maxwell’s first novel, Mrs. West comes upon a scene in Lady Murasaki’s The Tale of Genji:

At the side of the road he noticed a little orange tree almost buried in snow. He ordered one of his attendants to uncover it. As though jealous of the attention that the man was paying to its neighbor, a pine tree near by shook its heavily laden branches, pouring great billows of snow over his sleeve. Delighted with the scene, Genji suddenly longed for some companion with whom he might share this pleasure; not necessarily some one who loved such things as he did, but one who at least could respond to them in an ordinary way.

The excellent reader, upon discovering Maxwell, will understand this desire.