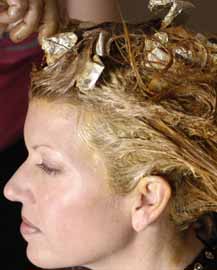 Hollywood has spoken: Blondes are better as brunettes. Don’t believe it? Rewind to the red carpet at this year’s Oscars or Golden Globes. Look at the glossy tabloids.

Even the queen of blond layers herself, Jennifer Aniston, now wears brown hair falling softly past her shoulders.

"Right now, I have 10 fashion magazines in my salon, and (on) the cover of only two are blondes. The rest are brunettes," said Doris Freeman, owner of Salon Rouge in Cherry Hill, N.J.

"And now, everybody wants darker hair. Before, I’d have to talk women into darkening it. Now, they don’t even think about it. They just sit down and say they want dark hair."

Some salon owners say 20 percent of their customers are making the switch from vanilla to chocolate. The change is quick, though it’s not necessarily easy, because darker hair draws attention to every facial feature and requires a new makeup palette.

Many women are tired of shelling out more than $100 every six weeks to lighten their roots; others are seeking a natural look with more shine. Still others have hair that, after years of being stripped of pigment, is so weak you can see through it.

But the main reason blondes are going brunette, stylists say, is that today’s tweedy, retro style harks back to the demure, ladylike look of Audrey Hepburn.

If you look at the old-time, glamorous actresses, almost everyone is a brunette, except for Marilyn Monroe, said stylist Michelle Eppright, of 19 West Beauty in Ardmore, Pa.

Trend watchers say darker hues stepped back into the spotlight two years ago, when Madonna opted for brown tresses. Last year, Eve introduced chunky brown highlights to her shoulder-length white-blond extensions. Britney Spears was next, followed by goddess-to-the-tweens Ashley Olsen, and so on and so on.

Today, hair companies from Aveda to Goldwell offer products specially formulated to ensure that brown and red hair have a healthy, natural shine.

"The look is so much softer right now. Chunky is over," said Giavanni Scott, owner of Philadelphia’s Total Serenity Hair Spa.

"Most of my clients are African American, and the hot color for them is chocolate brown. They want to be down-toned with warm chestnut and mahogany shades. Brown is just sexy now."

That’s the No. 1 reason model Laura Ash decided to abandon her blondness.

On Friday afternoon, Ash, 42, waltzed into a Southampton, Pa., salon with sandy hair. She’d been blond all her life and was simply ready for a change. Plus, she’d just left her agency, so now was as good a time as any.

"I’d noticed that the celebrities were getting their hair darker, and I decided I needed a change. Why not step out of my box a little bit?" Ash asked.

Deborah Gavin applied a floral-smelling pigment solution to Ash’s hair. An hour later, Ash swiveled around to the mirror as Gavin blew the newly brown hair, with a hint of terra-cotta, out straight.

Makeup artist Barbara Tendler was on hand to give Ash a darker shade of lipstick and tips on how to choose colors.

Her foundation, of course, will stay the same. But, Tendler said, she’ll have to choose warmer lipsticks. Frosty pinks should be replaced with browns, berries and rusts. Blushes should follow the same pattern.