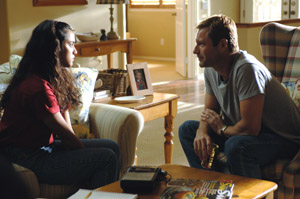 He was sent the manuscript and novel by Alicia Erian and became so absorbed with Jasira and her world that he had to share it with others.

“I felt such a visceral sense of relief that the usual story of victimization became a story of empowerment, and that she gained total control of her body and existence,” states Ball.

Even the film’s title is controversial – a derogatory slang term for an Arab-American. Originally titled, Nothing Is Private, Ball explains that the only constant critique in test screenings held was to change the film’s title. Ultimately, the decision was made to use the same title as Erian’s novel, hoping to encourage dialogue and tolerance, rather than to promote stereotyping and objectifying a minority culture.

The film delves into the inner world and psyche of Jasira (sensitively played by Summer Bishil), a Lebanese adolescent drawn into the seductive pop culture of America, yet who manages to maintain her charming naiveté.

When casting Bishil, a beautiful, talented, young woman originally from Saudi Arabia and now a Pasadena resident, Ball recalls, “There’s not a huge pool of beautiful Middle Eastern actresses, [that are] 18 [and] look 13, who can carry a major performance like this one!”

One memorable scene, lightening the heavy tone, is when Jasira poses for glamour shots at the mall, imagining herself as a pin-up model. Bishil’s personal favorite scene was when Jasira goes over to her neighbor, Mr. Vuoso’s home to interview him for a school project: “This most enabled and entertained the concept of her feminine power.”

When reflecting on this very complex role and acting opportunity, Bishil says she “felt lucky and excited to play a young girl searching for herself and not a one dimensional character.”

As Jasira’s newfound sexuality emerges, she yearns for affection and acceptance. The men in her life, each with their own agenda, offer her some feeling of connection, companionship and love.

Her father, played convincingly and authentically by Peter Macdissi, held long conversations with the author in order to fully develop and nurture his character. Portraying an old school, protective, very paternalistic, disciplinarian father, he intertwined both the good and bad (yin/yang) features to make him more human.

As he goes through a divorce with Jasira’s mom (Maria Bello), his daughter’s budding womanhood makes him uncomfortable, yet he loves her to death. Some of the film’s best comedic elements result from the deep father/daughter relationship and angst that ensues.

Aaron Eckhart, as Mr. Vuoso, her dangerous, alluring neighbor, describes his film experience, as “everything in black and white – and Jasira in color!”

He saw his character as “being weak with himself, yet strong with others.”

Co-star Toni Collette adds comic relief as the caring, buttinsky earth mother neighbor who proves it takes a village to save a young soul.

The entire cast found the film to be a true labor of love, pouring so much of themselves into the project, and were pleased to take part because of the really great roles, inspiring material and the film’s strong message.

Ball sees his target audience as “people who want to be challenged by stories with substance, humor and sophistication, more than just sitting there passively.”