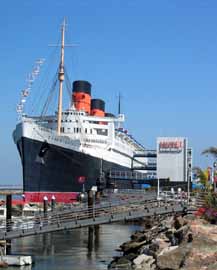 In order to benefit Queen Mary restoration and historic preservation, The Poseidon Adventure will be screened onboard the world-famous ship on Saturday evening, March 19.

The Academy Award-winning film, released in 1972 and starring Gene Hackman, Ernest Borgnine and Red Buttons, (figuratively) made waves when it was released. Partially filmed onboard the Queen Mary, The Poseidon Adventure – directed by Ronald Neame – tells the story of a group of cruise-ship passengers who must fight their way to the ocean’s surface after the luxury liner they’re vacationing on capsizes in the middle of nowhere. Hackman leads the way in this disaster-movie classic, as an easy-on-the-eyes priest who leads a handful of passengers through the ship’s bowels in a chancy effort to escape. The tension continues to rise up to the very end of the film.

The Poseidon Adventure will be screened in the ship’s Exhibit Hall at 6 p.m. It will be preceded by a silent auction of Poseidon memorabilia beginning at 4 p.m. and followed by a Q&A session at 8:30 p.m. with several of the film’s cast and crew members. Those scheduled to attend include Borgnine, Neame, actress Stella Stevens and stuntman Ernie Orsatti.

There will also be an exhibit from the Queen Mary archive featuring photos taken during the filming of the movie, rare movie posters, an original script and blueprints of sets and costume renderings.