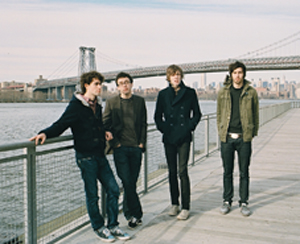 From their reportedly humble beginnings playing in a basement in Canada to emerging as the darlings of mtvU, Tokyo Police Club has set a new standard of musical excellence for bands everywhere. This four-piece from Newmarket, Ontario has risen like a phoenix from the ashes of other local groups and taken the stage at some of the coolest festivals around: Coachella, Lollapalooza and Bumbershoot.

But the band that would be king is not ripe with young Hollywood egos or flavor-of-the-month dilettantism. Instead, this is a quartet seriously fixated on rocking your socks off.

Keyboardist Graham Wright is just one-fourth of this successful team of musicians. With an upcoming opening spot on Weezer’s tour starting in October, one has to wonder how all these accolades sit with him and his humble young cohorts from the North.

” While the rigors of touring might prove taxing for some, Tokyo Police Club look at the road as an adventure, to say the least.

“You get to a [small town], and they don’t get shows through as often, necessarily, because a lot of bands just don’t think to go there. So when you do go there, they’re always really excited to see music. They come out, support you and it’s fun.”

Wright admits that he and his mates have played all the places that they could ever imagine wanting to visit. He’s also quick to dispel the myth that audiences are particularly different on either side of the U.S.-Canada border.

Then there are the band’s recreational activities. With shows on both coasts and all points abroad, the need to reset the counter occasionally sets in. However, at this juncture in Tokyo Police Club’s existence, there aren’t a whole lot of chances to “veg out.”

“We don’t usually get much downtime. But definitely when we’re in a city where we’ve got a couple of days off – it’s usually in New York or L.A. –somewhere where we have friends, those are the times when we force our friends to ditch work and hang out with us.”

Those coveted hangouts with buds usually consist of going out to eat at some of the best greasy spoons the city has to offer.

“We actually eat – a lot!” admits Wright. “That’s what I really look forward to is the burgers.”

As for the soundtrack to all this fellowship, that’s a bit more of a sticky wicket. Wright cops to not being as up-to-date on current musical offerings, but still maintains a few favorites from back in the day.

“I listen to a lot of Radiohead, of course. And Ra Ra Riot just put out their new record.”

From indie kids to Greek-lifers, Tokyo Police Club’s music can be found in iPods everywhere – thanks to word of mouth. The video for “Tessellate,” the first single off Elephant Shell, was a mainstay on MTV and MySpace. That has been followed up by immense radio play of “Your English Is Good” and “Graves,” which happens to be Wright’s favorite song to play these days.

Yet, with all the fuss, it’s so hard to believe how impervious Wright and company are to the music press and public hooplah. While remaining appreciative, they’re often oblivious to the prestige surrounding many of the media outlets going gaga over them.

“Apparently, it’s really important,” he explains. “We don’t know because we’re Canadian. So, you know, we didn’t grow up with MTV. We had MTV Canada, but it’s totally different.”

Interviews
Billie Eilish isn’t stressing over the Grammys. She’s busy worrying about the end of the world
818 views

Interviews
Jade Jackson may be the next big country-rock star. But first, she has some tables to wait
1,052 views

Interviews
YG was ready to drop a new album. Then his friend Nipsey Hussle died
836 views

Interviews
For Vampire Weekend, East Coast prep is out, and L.A. dad vibes are in
783 views