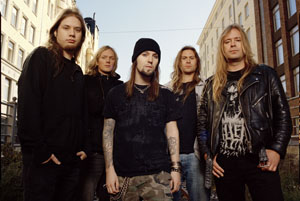 After their bloodthirsty performances on the 2007 Unholy Alliance tour, it didn’t seem like things could get much bigger or better for Finland’s Children of Bodom. Then along came 2008 with a new album and DVD, Blooddrunk, as well as more crowd devastating gigs at the Wacken Open Air Festival and on the Megadeth-hosted, Gigantour.

The album Blooddrunk was recorded and produced at both the Petrax and Finnvox Studios in Finland between October and December 2007. The video was shot on location in Germany in an abandoned “Russian military town” and features ghost like children frolicking amongst Zombie-esque adults in a world where everything is rotten.

“Blooddrunk is about being like a dick and spoiling your own blood, which has been happening a lot lately. So I decided to write a song about it,” says singer and guitarist Alexi Laiho on the DVD.

In the “Blooddrunk” video, the band performs below the surface of the Earth, suggesting that a Zombie-like future imminently awaits them above.

Formed in 1993, the Espoo, Finland-based quintet features Laiho, Janne Wirman on keyboards, Hennka “Blacksmith” Seppälä on bass, Roope Latvala on guitar and Jaska Raatikainen on drums. Their name honors the three teenagers that were mysteriously attacked and killed while camping at Lake Bodom in Finland on June 4, 1960. (In 2005, the lone survivor was charged with murdering his fellow campers, but in 2007 all charges were dropped.) The songs “Silent Night,” “Bodom Night” and “Children of Bodom” from COB’s 1999 release, Hatebreeder, take a darker look into what may have happened to the victims that fateful and chilling night.

The release and high regard for 2003’s Hate Crew Deathroll served notice that COB was a band that would continue to grow musically as well as demographically. In 2005, COB recorded Are You Dead Yet?, the highly energetic album that gave most North Americans its first heavy dose of what the band was all about.

The bonus track on it is a sped-up but neat cover of the Ramones’ “Somebody Put Something in My Drink.” The supporting tour in 2006 played to sold-out venues around the world and brought COB to the forefront of the metal scene.

The band increased their popularity even more in 2007 by winning over crowd after crowd with relentless efforts on the Slayer headlined Unholy Alliance tour. Their DVD, The Chaos Ridden Years, has a barrage of live footage from their Stockholm show and behind the scenes interviews with band members that give uncensored insight into their everyday lives. In 2008, COB also re-released its first three albums in addition to Tokyo Warhearts on the Spinefarm label.

Children of Bodom will perform Sept. 19 at the Wiltern. For more information, visit cobhc.com.