On the Road with the Ramones: (Bobcat) 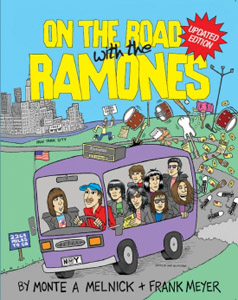 On the Road is a novelty book on first glance, but in truth is a well edited and highly informative collection of interviews pieced to form long, in-depth interview chapters spoken by the Ramones of all career phases, as well as tour manager Monte Melnick and various friends.

There’s a smattering of photos and posters, in addition to a clear view of their tour rider (big Yoo-hoo drinkers, that lot) and a mention of Los Tacos on Santa Monica Boulevard, where they’d stop whenever in Los Angeles.

But there are also some real bits of trivia here. The band aspired to be the next Bay City Rollers. Johnny and Tommy did time in the Tangerine Puppets together in the ’60s, and the Ramone stage name came from Paul McCartney’s hotel alias. Pro-America Johnny referred to spitting English punks as “European lowlifes,” and in Melnick’s words: “[Joey] looked awkward, he talked strange and he was into music. Exactly the kind of guy you wanted in your band.”

On the Road with the Ramones is currently available.