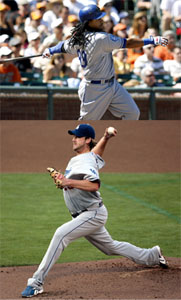 “What eight game losing streak? I forgot about that already,” chuckled catcher Russell Martin in the clubhouse on Sunday after the Dodgers completed a three game sweep of their season-long rivals, the Arizona Diamondbacks. The win came particularly sweet as it marks their eighth victory in a row since their dismal eight-game slide and put them solidly in first place, a game and a half above the D-backs. [Stats as of Sept. 7]

It was a little more than a week ago when it seemed everything was falling apart for the Dodgers. Nobody was hitting, and the starting pitchers couldn’t get past the fifth inning.

“We were pretty down,” recalls Joe Torre. “There was a moment after losing that last game when we were five games out. It was like, OK, let’s see what we are made of.”

The Dodger ball club answered that call in short order, culminating in dramatic fashion. Each of the three games against the D-backs had its stars. (The Dodgers are good at sharing glory moments.)

The first game of the series belonged to right fielder Andre Ethier and pitcher Derek Lowe. Ethier went five for five, including a homerun, and was responsible for knocking in five of the Dodgers’ seven runs. Lowe, meanwhile, put in eight scoreless innings, allowing a mere two hits.

Saturday’s day game, under a blistering sun, was more of the same, only this time it was Manny Ramirez bringing the beef with his fifth-inning, three-run homer, which put the Dodgers on the board. Starter Chad Billingsley put in six-plus innings without giving up a run.

Sunday’s game provided the most drama, with a come-from-behind 5-3 victory. Nomar Garciaparra played hero by knocking in the game-winning RBI. And later in the ninth, while playing first base, he leapt for a dazzling, diving catch to get the last out and steal a hit, which may have tied it up.

For the remainder of the season, the Dodgers will be facing teams with losing records. Despite this pleasing detail it should be kept in mind that the Dodgers have fared poorly on the road, and 11 of the remaining 17 games are away from home. They still have plenty of opportunity to learn what they are made of.

The next Dodgers home game is Sept. 19 vs. the San Francisco Giants. For more information, visit losangeles.dodgers.mlb.com.