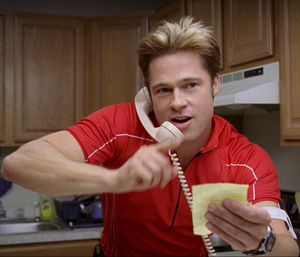 What goes up, must come down. This is true in the case of the Coen brothers. Their latest effort, Burn After Reading, falls a bit short of the success seen of 2007’s No Country for Old Men.

That’s not to say that the movie doesn’t display some fine comedic moments. John Malkovich plays Osborne Cox, an uptight fed who leaves his job, and in turn, is left by his power-bitch wife, Katie (Tilda Swinton). Katie’s having an affair with Harry (George Clooney). Harry’s having affairs with ... everybody – including Linda (Frances McDormand).

Linda works in a gym and spends her days confiding in Chad (Brad Pitt), a himbo personal trainer. These characters’ lives converge throughout the movie, but things don’t really heat up until a mysterious disc containing “classified information” is found in Chad and Linda’s gym.

Burn After Reading spends too much time picking up steam. While the Coen brothers are known for creating quirky characters, this group of people come off incredibly forced and self-conscious. Still, Pitt and a certain apparatus that you’ll have to see to believe are the saving graces of the project.