Dangerously In Shape: Are Killer Abs Killing You? 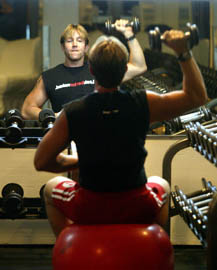 Max Turner realized he had a problem when his weight topped out at 95 pounds. The 19-year-old is 5 feet, 11 inches.

"So skewed was my view of myself, that I did not even realize that I had lost any weight until I went to the campus health center for a regular check-up and saw my weight," the University of Southern California student said via e-mail.

For Buck Winthrop, a writer/publicist in Miami Beach, the challenge is fighting his food obsession. "I eat one M&M and have to call 1-800-Jenny, literally. You think about every morsel you put in your mouth and how it will translate. My whole life revolves around that."

With six-pack abs and tony triceps plastered across magazine covers and ads, a growing number of men– and boys – are contending with anorexia, binge-and-purge eating and obsessive workouts.

"Men have a long way to go to catch up (to women) but they are closing the gap," says Dr. Leigh Cohn, coauthor of Making Weight: Men’s Conflicts With Food, Weight, Shape & Appearance (Gurze Books, $14.95).

Ten years ago, one out of 10 males had an eating disorder; today, it’s two in 10 and spiraling down to the preteen set, research shows.

"Ten years ago it was unheard of for a guy to have bulimia," said Dan Montesi, a counselor at Belen Preparatory School, the Jesuit private school in West Miami-Dade for boys in grades six to 12. "I’m seeing more and more of it, and not just at Belen but across the board."

An April 2001 report in the Journal of the American Psychiatric Association said one male suffered from anorexia for every four females; for bulimia – it’s one male for every eight to 11 females.

The quest for college scholarships or potential big money in pro athletics exacerbates the problem, Montesi says. "I’m seeing a lot of guys chomping at the bit to get into the weight room to get big. When I was in school there were a couple sports teams in there. Now a whole slew of kids are going in there to fit an image."

"I went crazy on every diet in the world," said the 42-year-old Winthrop.

Recently, he underwent liposuction to get rid of the extra layer around his midsection.

"It made me happier. If I binge and gain weight in other places and look strange it’s back to the drawing board," says Winthrop, who goes to the gym twice a day, sometimes six days a week.

A slip-and-fall accident in September caused Winthrop to curtail his workouts. He has gained 12 pounds, carrying 200 pounds on a six-foot, one-inch frame. He admits to binging but never purging. "I can’t imagine doing something like that."

But, increasingly, men are – although many are hesitant to get help, experts say.

"The stigma of being a man with a woman’s disorder is huge and prevents men from seeking treatment," says Dr. Paula Levine, the director of the Anorexia & Bulimia Resource Center in Coral Gables, Fla. "Eating disorders are off the radar as far as most doctors are concerned. They don’t even conceive of male eating disorders. It must be something else wrong if that person is losing weight."

Additionally, many men believe eating disorders are a woman’s disease, despite the proliferation of chiseled men in magazines, ads and TV shows. (Just look at "Desperate Housewives" and Jesse Metcalfe, the perpetually shirtless, hunky hedge-clipper who’s having an affair with the gorgeous Gabrielle (Eva Longoria) on the Sunday night show.)

"Have you been to the airport lately? There are almost as many male magazines as female magazines," Levine says.

Such images, coupled with diet advertisements pitched to men, are fueling the increase in male eating disorders.

"Media images do motivate me, even though as a former talent agent ... I know that what we see is often digitally enhanced so no one could attain that. Nonetheless, it is a motivating factor," Winthrop acknowledges.

To counter this, Levine, Cohn and the National Eating Disorders Association recently presented a multimedia discussion with the topic poor body images and unhealthy attitudes toward food.

"The pressures on men have changed over the years. We have a growing number of advertisers who realize they have sold diets to every woman, so they have targeted them to men," Cohn says.

"Watch TV. You’ve seen more men with their shirts off," Cohn notes. "You can show a male nipple. You do that with even one nipple on a woman and it changes our culture as you saw on the Super Bowl. But frontal nudity on a man above the waist is thought to be sexy."

Over the past few years, though, more men have learned about the disorder and are beginning to act. In the past decade, the number of males seeking treatment at the Bella Vita Programs, an eating disorder center in Pasadena, Calif., rose 50 percent, said clinical psychologist Dr. Patricia Pitts, the center’s executive director. Fifteen percent of her patients are now men, compared with seven percent 10 years ago.

Turner, the USC college student, turned for help there. He says his eating disorder began around age 14, prompted by a move to a new state.

"The stress of moving at such a pivotal age and having to make all new friends in a new environment no doubt contributed a feeling of unmanageability to my life," he said. "Food was the one thing that remained controllable and manageable. Hence, I began to control my food intake, not necessarily with the intent of losing weight, but merely to have something to control," he says.

His mother started to push him to gain weight, he said. "She worked at a gym, and it seemed to me that she always had a vision of me fitting some masculine ideal."

"Once again I found my life in a state of flux, and once again I turned to food to get a sense of control," he says. "I now did not have my mother covertly countering my disordered eating habits. My weight plummeted from around 125 pounds in high school to 95 pounds."

Turner spent five months at Bella Vita as both an inpatient and outpatient, conferring with psychologists, psychiatrists and a dietitian. In November he was discharged at a healthier 140 pounds – "and a whole new outlook on life."

Although symptoms develop later for males because they reach puberty later than females, males involved in sports that require weight-control – wrestling, gymnastics, horse racing, diving and running – are more likely to be bulimic, according to the center.

"In South Beach, image is the most important thing," said YogaFit trainer Luis Cepeda, who says he has waged a battle with food since taunted as a child with names like "gordo." "People there will do whatever it takes to look better than anybody else. I made my profession one that keeps me in shape."

Cepeda, 41, in an e-mail, says he is addicted to exercise and takes fat-burning supplements. He’s six feet tall and 170 pounds.

To Levine, the problem all boils down to unrealistic images.