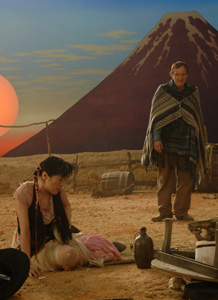 Sukiyaki Western Django is a play on the concept of the spaghetti western. Specifically, Takashi Miike, the director of the notorious Japanese film Ichi the Killer, created this film as an homage and quasi-prequel to Sergio Corbucci’s Italian western Django.

The story starts off as a marriage of multiple cultures. After an intense introduction starring Quentin Tarantino, we are introduced to a lone gunman who ends up in the middle of a six-gun turf war between the Minamoto and Taira gangs. The story unfolds as a hybrid of American western action and quirky, twisty Japanese storytelling with several allusions to the “War of the Roses” and Shakespeare.

Ultimately, the whole thing becomes a bit plot-heavy with too many plot elements for a typical western, but there is much to love about this film. The movie is full of intriguing visual choices, from the town of Yuta, where old west design is beautifully merged with Japanese temples and signposts, to the painted backdrops and anime sequences of the flashbacks. It also has some of the most intense, interesting gun, sword and chain gunfights ever seen in a western.