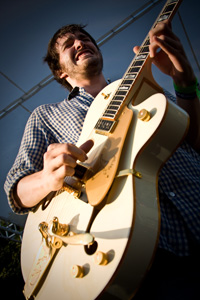 The LB Blues Festival is no place for mainstream teens and 20-somethings in search of the last, killer all-day summer fest. You won’t (or shouldn’t) pull out those hot dance moves you learned watching YouTube and perfected all summer long. They would confound the soul man next to you (his reaction however, would have been quite the expressive one and would have made it worth trying). You won’t be asking for healthy vegetarian food options (but the stunning bewilderment behind Ray-Ban Wayfarers would have made it equally worth your effort). You won’t be battling for front and center (they’ll just let you have it), and if you’re a cute girl used to the attention, you’re last on the list to get called up onstage to get a guitar solo rubbed on your torso.

But you will most definitely pay $8 a beer, perhaps falling asleep after your second beverage since you’ve now spent all your cash, relaxed after having flossed out the kettle corn from your teeth using world class down home Texas BBQ and sweating out your malt liquor in 90 degree weather. What could be fun about this, you ask?

You would have effectively stumbled on a piece of blues history. Countless songs started here with blues legends like Chuck Berry, Booker T. Jones, Taj Mahal, British bluesman John Mayall, 95-year-old keyboard player Pinetop Perkins, Eddie Floyd, Charlie Musselwhite. Songs you’ve heard innumerable times, brought to you either by the source or by qualified performers channeling the greats. The quality and texture of which, never compromised.

One of the greatest pleasures of this 29th annual blues voodoo experience was the discovering of 20-year-old blues slide guitarist Robert Francis. Learned at age 13 by great blues shaman Ry Cooder, the killer performance by him and his band made plain that blues still has a future, yet. Absolutely.