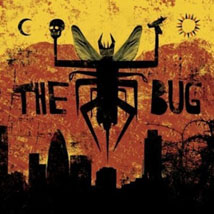 The Bug is a project of producer Kevin Martin, and here he spins out a dozen mostly dancehall grooves for different MCs to toast (rap) over. Tippa Irie gets the party started with a list of complaints on “Angry,” rallying against everything that irritates him and touching on serious subjects like suicide bombers, world hunger and the state of the ozone layer.

Dub effects take hold of “Skent,” a deep-Rasta joint featuring Killa P and Flowdan that has lyrics that are partially in the Jamaican patois and partially nonsensical. “Too Much Pain” is performed by Ricky Ranking and Aya, while “Insane” featuring Warrior Queen bounces along complete with a persistent sproing that surely represents a mind’s final snap.