MERCEDES HELNWEIN: Whistling Past the Graveyard 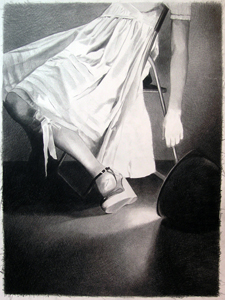 Mercedes Helnwein was born in Vienna, Austria, daughter to renowned painter Gottfried Helnwein. She moved to Ireland with her family, where she spent her teens drawing, writing and listening to the blues. Her influences, which range from Southern Gothic traditions to the cartoons of Robert Crumb, eventually landed her in a style distinctly her own – unsettling, direct and quietly humorous.

In 2000, she added Los Angeles as a second home and officially began her career by contributing some of her drawings to a show hosted by Jason Lee, one of the first to collect her work. Teaming with friend and photographer Alex Prager, Helnwein continued to exhibit regularly around L.A. in unorthodox one night shows, which attracted the attention of the media as well as galleries, and led to her exhibiting her shows, Last Chapter of Dreaming, Strange Days and Local News in Berlin, Dublin and New York in 2006 and 2007.

With her current show, Whistling Past the Graveyard, Helnwein returns to Los Angeles (through Sept. 20) at the Merry Karnowsky Gallery (170 South La Brea Ave., Los Angeles) and compliments her work for the first time with a three-minute short film, featuring the characters from her drawings, with music composed by her brother, Ali Helnwein.

Currently, Mercedes Helnwein is working on an upcoming exhibition for the Pool Gallery in Berlin for November 2008. She is also working on a second novel and continuing video collaborations with her brother. For more information, visit mercedeshelnwein.com.