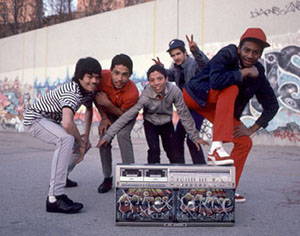 Ever since Cinefamily took over the Silent Movie Theatre, Los Angeles’ obscure movie fanatics have had their weeks full. In addition to random monthly series – like last year’s “Home Alone,” which concluded with a double screening of Steven Soderbergh’s King of the Hill and the ’90s classic, Home Alone – the Cinefamily programmers have reserved days of the week for like-minded offerings, like Silent Wednesdays and Saturday Noir Matinees.

Music Thursdays, however, is always the most fun, like June’s “Don’t Knock the Rock” music documentary festival. This month’s “Word is Born” old school hip-hop series is bringing that tradition to a whole new level by jamming rare turn-of-the-’80s street flicks into as many Thursday nights and special screenings as possible.

Tomorrow evening’s schedule includes three impressive movies – Style Wars, Stations of the Elevated and All City – and an accompanying DJ set. The night’s features are a triple threat of early hip-hop culture through the eyes of those who didn’t even know they were in the middle of it.

Style Wars, the 1983 PBS documentary that never aired, follows New York City’s creatively diverse graffiti subculture by hanging out with over 30 artists including Seen, Dondi, Skeme and the one-armed writer, Kase 2. The film also exposes the repercussions of the emerging art by talking to the head of the MTA, disgruntled train riders and then-mayor Ed Koch.

Stations of the Elevated follows an easy concept: 40 minutes of NYC elevated train footage played under Charles Mingus tunes. Imagine being on a choppy public transportation ride to work with great views of local street art and avant-garde jazz blaring though your iPod. Mmmm.

Head back on Sept. 23 for a special screening of Los Angeles hip-hop history. Delicious Vinyl has unearthed a smattering of footage from Jean Michel Basquiat at the Rhythm Lounge to the label’s own 1988 electronic press kit. With music videos, dancing and a DJ set, be sure not to miss the last few chances to get your September’s-worth of hip-hop history.