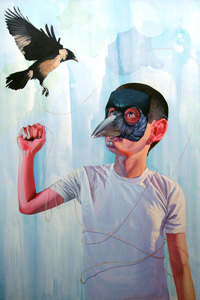 Like many artists, Nate Frizzell loved to draw as a child. He would sit with his father’s old books on how to sketch figures, and he basked in the praise of people whenever he’d proclaim that he’d never even taken an art class.

Growing up in Riverside, Calif., Frizzell’s only exposure to professional art was the annual art fair and the local scene that was dominated by graffiti artists like Jeff Soto. After picking up a paintbrush for the first time in high school, Frizzell fell in love with the medium and, at the urging of teachers, enrolled at Otis College of Art & Design. Here, Frizzell got what he calls his real “introduction to the art world.”

He decided to move to Los Angeles, remarking: “I knew about fine art, but I knew that I had to immerse myself in the scene.”

Frizzell quit his day job and decided to focus on art full-time after Beau Basse of Culver City’s project:gallery gave him a shot with a show and became his manager. Frizzell’s enthusiasm is evident as he talks about his upcoming projects that include a solo show and a piece for graphic novelist/screenwriter Neil Gaiman (Stardust, Beowulf).

“Being a ‘starving artist’ pushes you to have drive, presses you to improve. Having to do it as a living makes each painting better than the last,” says Frizzell.

While it’s evident that his work has grown leaps and bounds in the last year, the desire to stay true to what he loves to paint versus what might be commercially viable is evidenced in some of his pieces.

In Hope on a String, a raven hovers above a masked youth as a string tied to its foot wraps around the boy’s body.

“The bird is a symbol of freedom, wanting to get away from pressures with all these thoughts flying around. The boy in the mask just wants to fly like the bird,” Frizzell says. “It blows my mind how much of me I put in there.”