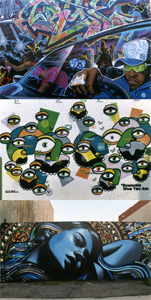 It used to be regarded as nothing more than gang turf war hieroglyphics. However, with the advent of hip-hop culture, graffiti, or urban art, has taken on a life of its own.

Drive through any L.A. neighborhood and you’re almost certain to see bright, colorful and aggressive “tags” done by some of the best artists that you’ve probably never heard of. As a matter of fact, many of the most highly regarded graffiti artists in this town – known as “writers” – have gone from street misfits to making thousands for their building decorations.

Love it or hate it: graffiti isn’t just about spray painting old buildings and pissing off the cops. It’s an important form of self-expression for many urban men and woman who just won’t settle for a traditional brush and canvas.