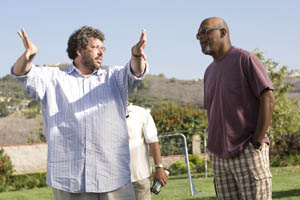 Neil LaBute isn’t afraid of controversy, as anyone who’s seen his debut, In the Company of Men, can attest. His latest directorial effort, Lakeview Terrace, is a thriller that centers on issues of race, marriage and the abuse of power; gritty, complex topics LaBute had to address while maintaining the film’s PG-13 rating.

“The MPAA is a tricky thing to work with,” LaBute offers, relaying that many of their requests would have significantly compromised the film he was trying to make. “It became a weird shuffling of material, and, along the way, interesting things happened.”

When asked about the larger issues the film confronts, he’s unruffled.

“For as much as we talk about race in this country, we don’t have that many films about it,” LaBute contends.

“And the film is about it ostensibly because of who’s in it,” he says referring to Samuel L. Jackson as Abel, a hyper-controlling cop living next door to newlyweds Chris and Lisa, played by Kerry Washington and Patrick Wilson, as an interracial couple Jackson disapproves of.

“There are no scenes where we go ‘hey man, let’s talk about race,’” says LaBute. “It’s just there because of the nature of the dynamics.”

As a director, LaBute was far more concerned with creating character believability.

“We are complex people. I didn’t want [Jackson] to be just the Bad Guy. I wanted him to be a guy who kept making questionable choices and that could legitimately be made by anybody.”

Jackson agrees: “I think [my character] has a definite point of view that he’s not afraid to express. He has a moral compass. It just goes another way.”