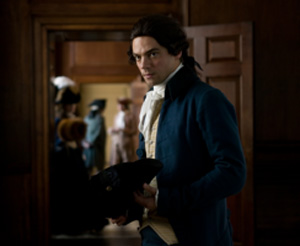 It’s the tale of a fashion-forward socialite and her torrid affair with a charismatic politico. Director Saul Dibb takes the prim and starchy period piece and injects it with a nod to the present along with a touch of smoldering sex in The Duchess. Keira Knightley stars as Georgiana, the Duchess of Devonshire. As a teenager, this beautiful girl was chosen by a haughty aristocrat (played by Ralph Fiennes) to be his wife and produce an heir to his family’s bloodline. However, the Duchess didn’t bank on the cruelness and sexual deviance of her new husband.

That’s when her affair with Charles Grey begins. British actor Dominic Cooper takes the reins as the duchess’s paramour – a man that would one day go on to become Prime Minister of England.

While Cooper may be initially known for his singing as the husband-to-be in Mamma Mia!, he delivers fantastic drama opposite Knightley. To get a feel for the type of fiery public speech he’d have to deliver as Grey – an individual who could easily be a carbon copy of the Kennedys, Tony Blair or even Barack Obama – Cooper attended oratories in British parliament. He also took a closer look and discovered that he and his character really aren’t that different, once you scratch the surface.

As for accessing the necessary emotion to convincingly portray a man that hasn’t drawn a breath for centuries, Cooper went straight to the source ... sort of.

“We had this wonderful gift of Amanda Foreman’s book [Georgiana, Duchess of Devonshire] to continually refer back to to get a real understanding of who these people were.”