My Morning Jacket: Tailor Made to Ignite Change 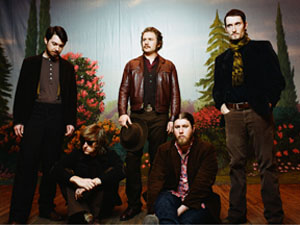 “I’d probably get a tattoo of a man running quickly while on fire.”

My Morning Jacket drummer Patrick Hallahan sums up the experience of recording their fifth full-length album, Evil Urges, in the form of a tattoo design.

For a band of admitted control freaks, relinquishing a bit of power during the recording process for only the second time in the 10 years since forming really was akin to lighting themselves on fire.

My Morning Jacket’s original line-up, including vocalist Jim James and bassist Two Tone Tommy, recorded their early work (1999’s The Tennessee Fire, 2001’s At Dawn) at the farm of first guitarist (and James’ cousin), Johnny Quaid. In 2002, James recruited childhood friend Hallahan, and MMJ set to work on their ATO debut, It Still Moves, at the Quaids’ farm where, as Hallahan says, “We controlled every variable out there.”

The band’s relentless tour schedule eventually led to Quaid’s departure. After the addition of Carl Broemel on guitar and Bo Koster on keyboards, the quintet went to the Catskills to collaborate with producer John Leckie (Radiohead, Muse) on the critically lauded Z (2005). They also appeared in and contributed to the soundtrack of Cameron Crowe’s Elizabethtown, a film that paid tribute to their home state of Kentucky.

Music was a big part of growing up in Louisville.

Hallahan says, “Music was always a staple in my house. My dad would play guitar and sing to put me to sleep. My grandparents were musicians so whenever I stayed at their house, they were always practicing. It was our entertainment instead of the TV.”

The entire band cites an eclectic range of influences, from Neil Young and Led Zeppelin to Nina Simone and the Muppets. One of Hallahan’s most special concert-going memories is seeing Etta James perform.

“She melted my brain so I can’t even retain memory anymore. It was just that good,” he says.

The members’ distinct blend of musical tastes makes for an interesting mix of personalities, but Hallahan says, “We’re all a cohesive unit. There’s always jokes – Bo used to leave his phone charging in the dressing room, so one of us would always shove the antenna in a banana while it was still charging – but that’s the extent of it. We’re usually really nice to each other.”

However, their offstage geniality produces exciting chemistry onstage. They’ve performed at small clubs, big venues, festivals like Bonnaroo and Coachella and even with the Boston Pops.

“That was probably one of my favorite shows of all time. It was just ridiculous. We hope to do that again,” says Hallahan.

My Morning Jacket is continually open to new experiences as well as sounds, as evidenced on Evil Urges. Once again, James shared production duties, this time with Joe Chiccarelli (the Shins, White Stripes). It’s evident the band believes in the necessity to evolve.

Hallahan comments, “Who doesn’t want to be better at what they do? If you’re satisfied with what’s going on, then you’re missing out on the next level.”

He goes on to share some advice for other bands that share the desire to stay true to themselves while pushing themselves to grow.

“The word ‘no’ doesn’t really exist. It’s just a hurdle that you have to jump. Being creative is hard, you have to have your antenna up, stop listening to what everybody is shoving in your face and start listening to things on your own and make your own decisions. If bands do that, then we’ll have a fantastic new wave of music in the next few years.”

My Morning Jacket strives to set the existing musical landscape on fire, and if Evil Urges proves anything, it’s that they have the innovation and determination to do just that.

Evil Urges is currently available. My Morning Jacket will perform Sept. 21 at the Greek Theatre. For more information, visit mymorningjacket.com.