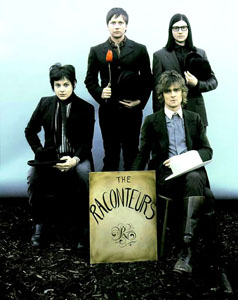 Where modern hipster style meets the old school, hippie listen-while-intoxicated mentality, MGMT is making indie rock magic. While I’m usually highly skeptical of things Rolling Stone says I need to watch, and while those things are often thusly doomed to fail by being branded with the RS “Next Big Thing” tag, the Brooklyn duo are doing something very worthwhile with their music. Psychedelic rock that’s just as infectious if you’re not under the influence, MGMT’s brand of pop-friendly indie has earned them spots opening for the likes of Radiohead and Beck, and if it’s good enough for them, it’s good enough for you.

Because everything else in this week’s Frequency is tight-jeaned, fashionably emaciated, shaggy-haired and cerebral (with exception to Jessica, of course), there has to be at least one gritty and shredding show for y’all. Frontman Chino Moreno may be getting older, but with that comes a level of experience that none of the other musicians listed here can match, dare I say it, even Jack White. No gimmicks to speak of, Deftones’ music isn’t defined by what the band members wear or who they hang out with, just by the raw and unfiltered rock they bring to the stage every time they play.

Speaking of Beck, Mr. L.A. indie himself isn’t getting any younger, but nevertheless, he continues to challenge both himself and his younger contemporaries with his newest musical endeavors. And you get round two of MGMT for the week at this show, which is never a bad thing.

No, really. I’m dying to see how this goes, given her recent track record with live performances.

You will go see Jack White, and you will like it. End of story.

Does It Offend You, Yeah?

Admittedly, this one is more of an acquired taste than some of this week’s other picks, but acquiring it just calls for a change of perspective and knowing the proper context to put them in. Approach listening to them as you would any other British indie band and you’ll be in for an aural shock, but put them onstage opening for Nine Inch Nails, and things make a little more sense. It’s still indie, in a broad sense, but man, if this isn’t the heaviest, most concussive, electronic-fused indie you’ve ever heard.