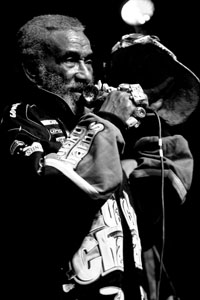 Seventy-two-year-old Lee “Scratch” Perry wasn’t scratching anything at the El Rey, but he did tickle the hell out of the crowd’s olfactory nerve. It was kind of like Lee Scratch-and-sniff after he lit up a half-dozen incense sticks during the first song.

Perry’s not just any old dude. He’s one of them granddad rarities attributed to reggae at its rising, having helped form it tough at its roots. He has produced albums for Bob Marley & the Wailers and the Heptones.

The band Perry’s got behind him now is comprised of youthful, 20 or 30-somethings. They jibed it, absolutely. Lee Scratch has still got it.